March, 2015 – After many days of hiking and photography during our visit to Big Bend National Park in Texas, we took a wonderful excursion to the little town of Terlingua, just few miles west on Route 170 outside the west end of the park.

This is a historical mining ghost town that has been brought back to life with a hippie vibe. When we arrived we saw a group of folks —all skeletons — having a party in a big ol’ bus heading for Miami Beach.

As we drove further into town, we looked over and saw the masts of a ship. What?? We backed up and looked again. Yup! Apparently someone was dreaming of the sea when they built their home in Terlingua! 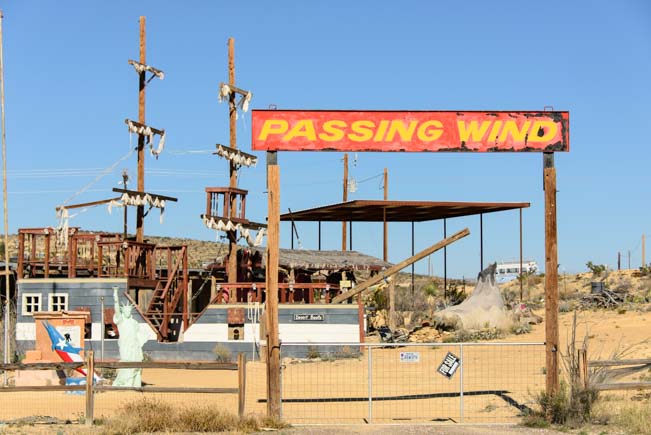 The town has its origins in the 1880’s when cinnabar was discovered. Cinnabar, we found out, is not a candy bar version of the cinnabun. It’s a metal from which mercury is extracted. The Chisos Mining Company set up shop shortly after the discovery, and immigrant miners from Mexico soon began working the mine. We found it fascinating to wander around the old cemetery. All of the deceased had been Mexicans, it seems, and the style of the cemetery was distinctly Mexican. 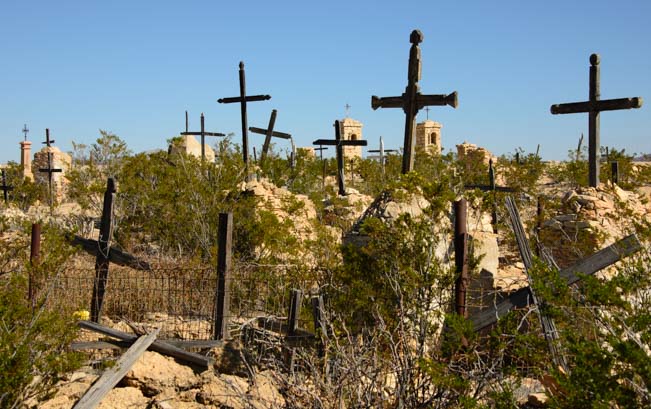 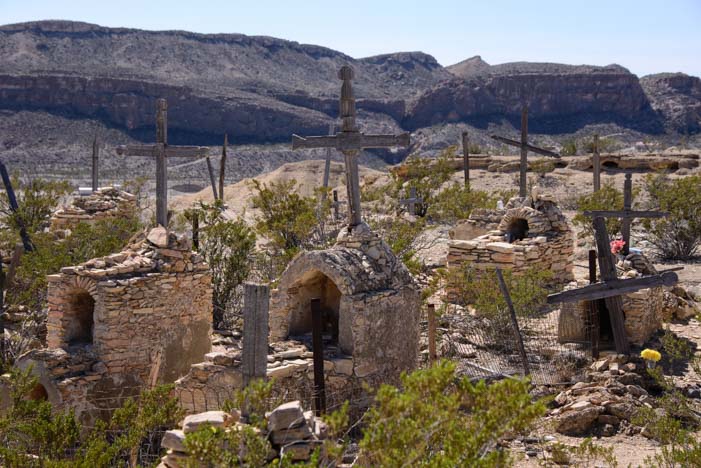 The style of the graves was distinctly Mexican.

There are all kinds of headstones and graves in the cemetery. Many graves are marked with a simple wooden cross. But some are quite elaborate. Many of them have a small stone shrine that shelters trinkets of various kinds.

A shrine in the ghost town cemetery

We heard that the Mexican “Day of the Dead” celebration (the day after Halloween) is quite an event here in the Terlingua Ghost Town Cemetery! 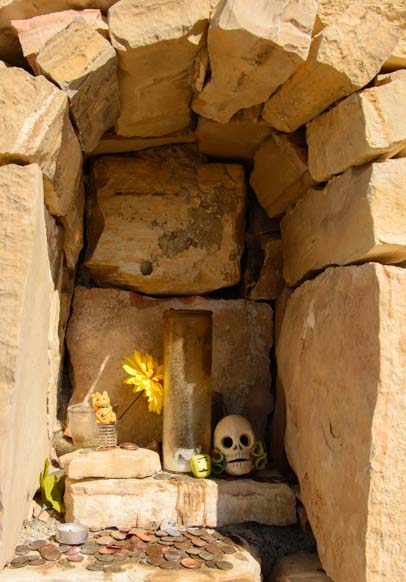 I would love to see the Day of the Dead celebration here!

Nearby there are ruins of the homes the miners lived in. We felt like explorers as we prowled around some of the different buildings. There are lots and lots of buildings, and they are in various stages of decline.

Some of the ruins are in better shape than others, but all make great photo ops!

None of them have windows or doorways that are intact, but there were some pretty views from where the buildings were situated. 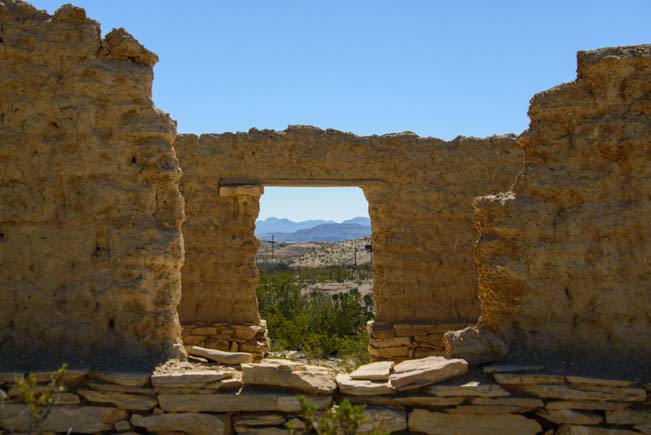 The homes might have been small but they had great views.

What stories could these walls tell?

The Chisos mine was at its heyday in the early part of the last century, because Mercury was in high demand during WWI. However, even though there were hopes that there would be another boom cycle for mercury during WWII, it never materialized. So in 1946 the mine was abandoned. 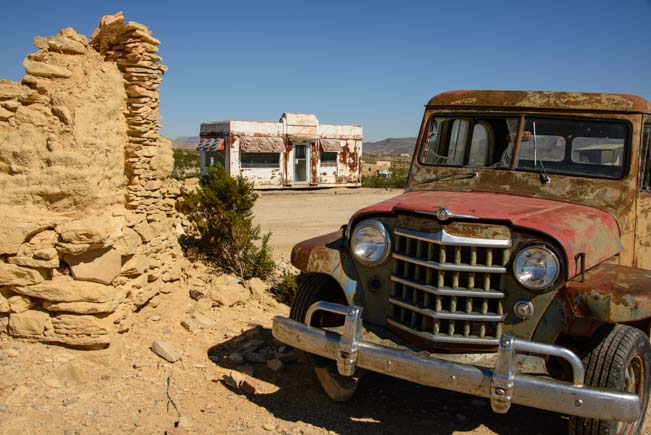 Today, people have moved back in and started making use of the ruins, breathing life back into them and incorporating the ruins into their homes and businesses. 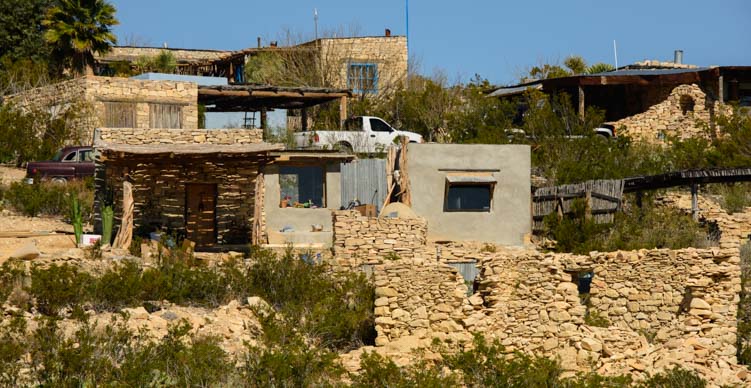 New homes and business rise up among the ruins.

There is a sense of history all around town.

The old movie theater is now a restaurant and bar with the rusting relic of an antique car out front. 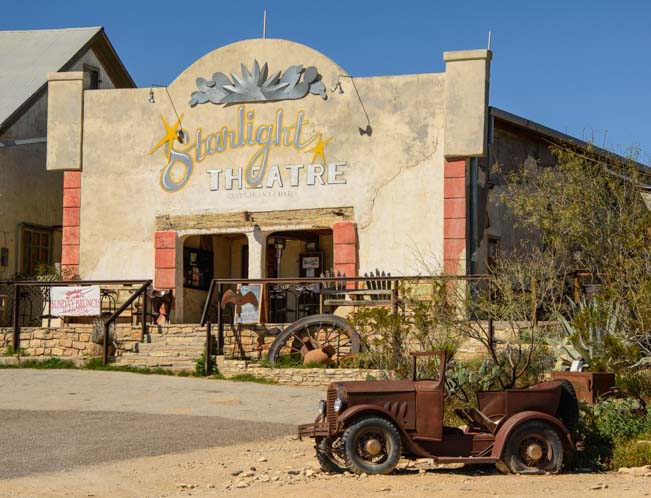 The movie theater was called the “Chisos Theater” in the 30’s. Now it is a restaurant and bar.

Nearby is the jail, with antique handcuffs hanging from the bars!!

Tools to keep the town tame!

This is a town that is just a little offbeat, and a local artist has created some intriguing metal sculptures. One is a very large flying bug! 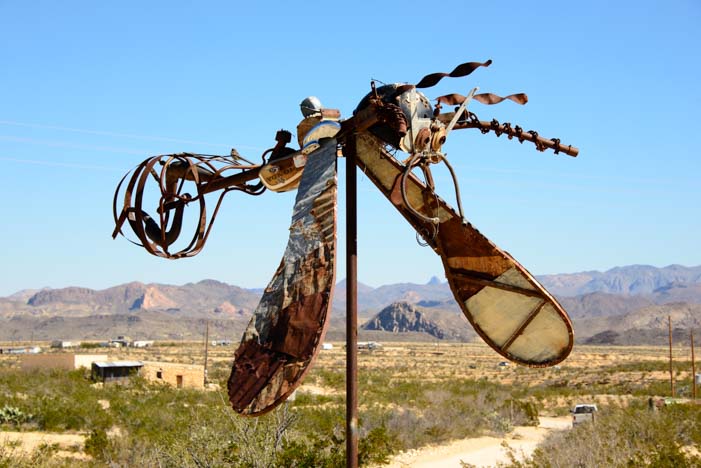 There are several places to get a bite to eat sitting outside on a deck. The Boathouse looked like an intriguing place but wasn’t open…

But a little B&B, called La Posada, had wonderful Mexican food and four rooms to rent. A pair of long distance cyclists were staying there, and they were poring over maps.

This seemed to be the place the locals liked to come and hang out in the mornings, and we met a man in his 80’s who walked 3 miles each way from his home to get a coffee and chat with his friends here every morning! He wore a crisply pressed shirt and jeans with a big cowboy belt buckle and cowboy hat, and he said he just loved living in Terlingua.

La Posada is a cute place for a meal or an overnight, and it’s where the locals hang out over coffee.

If you are heading to Big Bend, and you’ve gotten your fill of nature in the National Park, a side trip to Terlingua can make for a really fun change of pace!