Mark finds the Beatles in the Peter Max Collection

Mark tries out a chair

The "Pickin' Porch" comes alive during the Folk Music

THe Dulcimer Shoppe where beautiful Mountain

Feelin' Groovy with a Dulcimer

Putting the finishing touches on a dulcimer

Walton's wasn't the biggest game in town at first

City park with a Confederate statue

for a door handle

Missippi and continued north to Arkansas.  For a week we were treated

day trips to places we might not have otherwise visited.

affectionately referred to as a motorhome on stilts.  It juts out over the

plenty of room to rage underneath.  Perhaps this choice of setting and

architecture is symbolic of elements of Clinton's eight year term.

Whether you are a Clinton fan or not, the museum offers a look at his

presidency in the context of history, presented in the most positive light

were there.  As we entered, there was a beautiful image of the White

House and portraits of many recent presidents as well, including, of

course, a series of images of Mr. Clinton.

Mark is a die-hard Beatles fan, and he loves Max's artwork, as it

has close ties with the Beatles.   He quickly found a Beatles

The museum opens with an exhibit of Clinton's presidential car.  It was

built with all the latest high-tech gear, but as we read the list of

long ago Clinton was president.  1992-2000 is quickly slipping into

for entertaining guests at the White House.  The plates featured a

bold image of the White House in the center, encircled by an ornate

design, giving visiting heads of state no doubts about just where they

were and who was entertaining them.

Seeing this table setting and one of Hillary's

gowns along with many photos of them both

impressed upon us just how much these

grand, formal social events are a part of the

There were glass cases filled with stunning

gifts the Clintons had received from leaders

all over the world, many from remote, small

countries.  Our favorites were an image of

Socks the cat playing the saxaphone and a

Trek bike and yellow jersey given by Lance

Armstrong (however, we were amused that

the bike's drive-train was Shimano Ultegra,

not the high end components a president

Music is abundant in Arkansas,

and on another day we stopped

into a guitar shop in Searcy and

men sat in the middle of the shop,

happily strumming away.  The

friend on the mandolin.

The Ozark town of Mountain View

year, and when we visited, the town was

gearing up for the festivities.

All the buildings in this town have stone

walls that are a pretty yellow-orange hue.

Mark found a perfect seat for himself outside a furniture

shop that features oversized furniture made of rough hewn

Inside, I spotted a sign whose words ring true for us.  On

days like this, when we discover a new town or place that

lifts our spirits, we feel the fleeting nature of time and

preciousness of every moment more intensely than we ever did in our old lives.

We turned a corner and saw two old men

wooden cooking spoons.  They were creating

a large pile of cedar shavings as they

whittled, and we watched them for a long

time.  They expertly rotated the wood in their

hands and shaved off paper thin strips of

wood, working together in contented silence.

Not far from where they sat, Mark discovered the "Pickin' Porch"

where musicians gather to harmonize.  What a cool town.  We want

to return some year when the music festival is in full swing.

music store, and Mark tried a variety of guitars.  Many were very

ornate with elaborate headstocks and inlaid wood on the guitar body.

beautiful mountain dulcimers are hand crafted and sold.  Long ago we

had visited a tiny dulcimer store in Sedona, Arizona, where the shop

owner was playing "Feelin' Groovy" by Simon and Garfunkle.  This

memory had remained with us over the years, so whenever we

thought of dulcimers we thought of that Sedona shop owner playing

As soon as we walked into the Dulcimer Shoppe in Mountain View,

Arkansas, Mark asked Judy, who was showing us dulcimers, if she could

play "Feelin' Groovy."  I laughed -- how could she just come up with that

out of thin air?  She asked Mark to hum a few lines, and within minutes

she was playing it expertly on her dulcimer!

She called out to

Woods, owner of the store:  "Get a base and accompany me!"  He obliged,

life.  His love of music and beautiful instruments is infectious, and he

us.  Back behind a wall of glass we watched the dulcimers being lovingly

Deep in the Ozarks, we felt like we were reaching into the heart of

American culture, one that is home grown, a little rough around the edges perhaps, and lacking any kind of commercial spin.  So it

stations broadcasting in Spanish.  As we listened to a Mexican um-pah beat for a while, I thought of my German ancestors who had

settled in Wisconsin in the mid-1800's.  The parents spoke German exclusively at home, and only two of the four children were

born on US soil.  At night the father read aloud to the family by oil lamp.  He would read latest Charles Dickens novel translated into

German.  Suddenly the Spanish radio reaching out to Latinos in the Ozarks made sense and

seemed as American to me as everything else we had seen in Arkansas.

With these thoughts in mind, we pulled into Bentonville, Arkansas, arguably the birthplace of

modern America's consumer based economy and, by extension, possibly the very heart of

It is the home of the Walton family's retail dynasty and site of Sam Walton's first store,

predecessor to today's Walmart chain.  Opened May 9th, 1950, the storefront is humble and

simple, not even the largest building

on the block.  It faces a town square

which is built around a large statue of

Unlike most American small towns,

this one is flush with Walmart money, and there is a

plaque thanking a Walmart CEO for the investment

the company has made in sprucing up the town.

Every building on the square sports a fresh coat of

paint and bright clear windows, a rarity in small

town America where boarded up windows and

store is now a Walmart visitors center, and there

are wonderful black and white photos from the

store, regardless of what the "market value" might be.  He

resented the way small town proprietors tended to overcharge for

necessities, and his intention was to bring the prices that were

available to big city residents to all the small towns of America.  He

bought an airplane to make it easy to visit his far-flung stores, and

later said that without Walton Aviation, Walmart never would have

become what it did.

consumer he also helped put China, India and other distant

societies plunk in the middle of the world

economy.  At the same time, he led the

cultural price that we have all happily paid so we

Mom-and-pop stores still thrive in other

industries, however, bringing color and charm to

their communities, and our sampling of Arkansas music shops had proven that.  Mark

especially liked the local Bentonville bike shop, Phat Tire (one of his favorite beers as well).

On their front door they replaced the traditional door handle with a mountain bike frame.

The list of local weekend rides they had posted looked very tempting too.

However, we had an appointment for warranty work on our trailer in Chanute, Kansas, and

we had to keep moving. 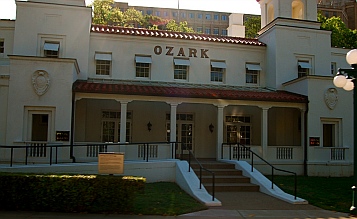 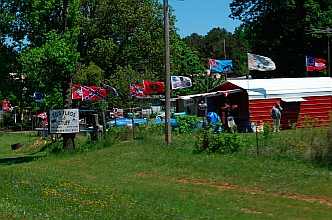 Overlook in the Ozarks

mission to get to Kansas, but we took the scenic route through

the Ozark mountains rather than the interstate to get there.  We

hot baths.  Fancy bathhouses were erected along the main

drag for tourists to enjoy steaming in the hot baths.  We didn't

take a dip, but the buildings were intriguing.

intrigued to find that

was flown in many

courtyard of a public

flag was in the

front yard of a

The Scenic Route 7 through the mountains is a hilly, twisty drive.  It was

a little bit of a struggle with the buggy, and Mark had to concentrate as

we wound our way up and down through the range.  We saw lots of

motorcycles and even a motorcycle rally.  This would be an ideal

place for any kind of two-wheeled vehicle.

There weren't too many lookouts with views, but we did stop at one

where we got a good view of the valley.

We weren't near any major cities, and the gas prices reflected that.

a gallon.  Now, a mere three months later, diesel in Arkansas was

the Grand Canyon, two months after we took this photo, diesel would

We passed through several fascinating little communities where all the signs were in Spanish.  I had always thought that the border

states had the most Latino residents, but here in the heart of the Ozarks we discovered some thriving Hispanic communities.

We had been told at two visitors centers in Arkansas not to miss Eureka Springs.  It is a quaint

town, they said, with a very cute main street and lots of charm.  Unfortunately, it is not RV

friendly.  In fact, it is not tourist friendly.  We stopped at the visitors center on the edge of town to

find out where we could park so we could walk the town.  It turned out that in order to see the

shuttle bus into town -- $9 for two people.  So in order to see this quaint, charming town we had

to shell out $14.  On top of that, the restrooms in the visitors center weren't even in their

building.  They were way around in the back behind a bunch of shops, and they were decrepit

and dirty.  So we skipped Eureka Springs.  One theme that has been repeated over and over in

our travels is that the more you pay the less you get.

From the Ozarks we scooted through Missouri and finally landed in Chanute, Kansas, a small

town tucked into the southeastern corner of the state.