June 2015 — After saying goodbye to the long tree shrouded road that winds from the Smokies along the Blue RIdge Parkway and into Shenandoah National Park, we pointed our RV to the northeast and began a wild ride.

Our goal was to get from Virginia to Maine without getting too tangled up in Philadelphia, Pittsburgh, New York City, Albany or Boston, and we chose a route along secondary highways that threaded its way between them all. 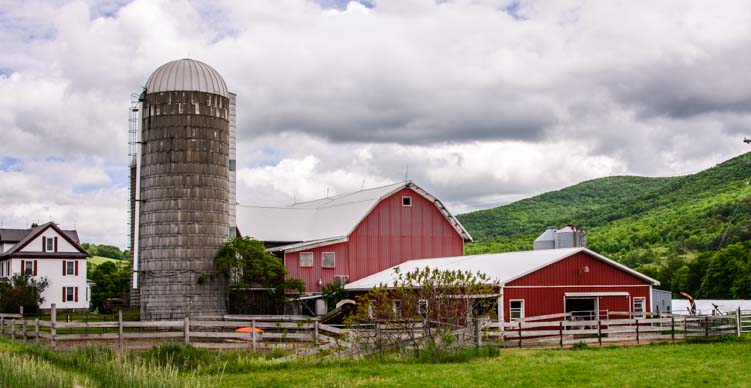 We saw lots of beautiful barns in the countryside

We zig-zagged through small towns in the countryside in Pennsylvania. This is big time dairy farming country, and barns, farmhouses and silos of every shape and configuration dotted the landscape. Red ones, green ones, white ones. Classic! 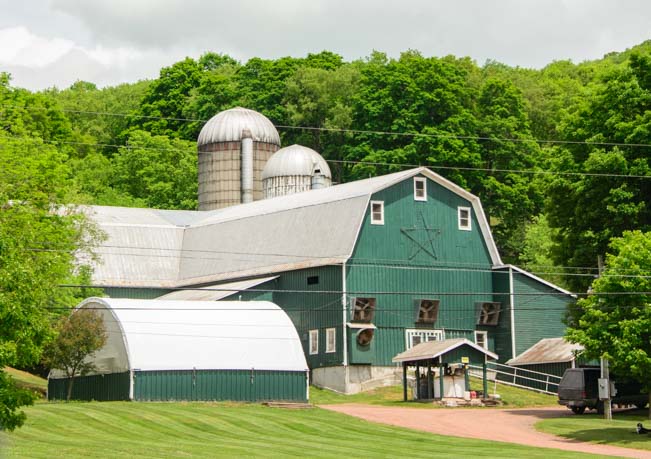 Not too many farmers paint their barn green! 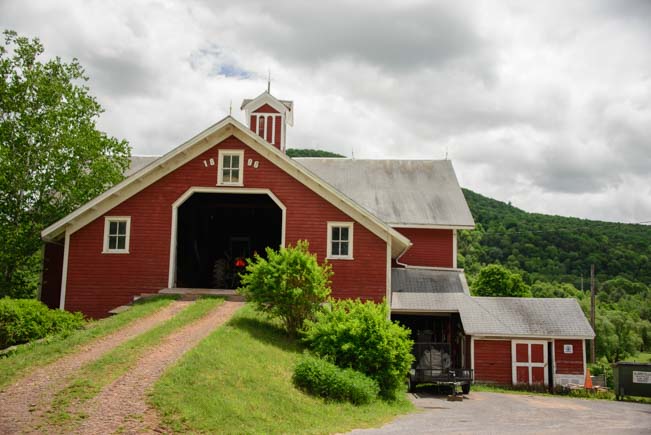 Our dance down the highway was punctuated by occasional scenic surprises that got me leaping out of my seat to try to catch them with my camera. Out of the blue, we came across a fabulous arched bridge. This turned out to be the Tunkhannock Viaduct in Nicholson, Pennsylvania. 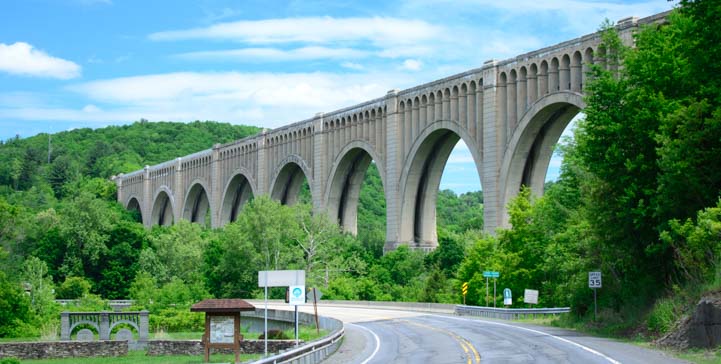 We crossed into New York and eventually ended up on Scenic Routes 10 and 23 that follow the farm filled valleys in the Catskill Mountains. 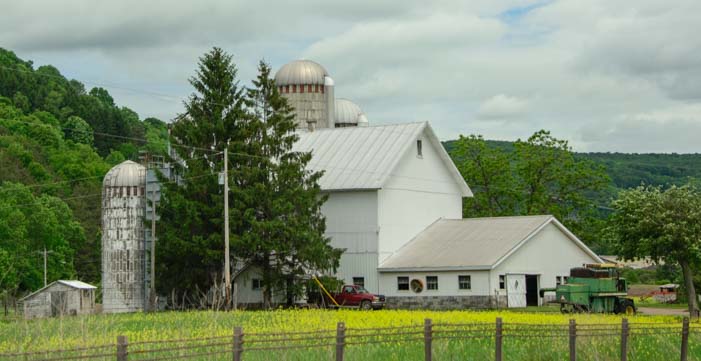 The views along the scenic drives through the Catskills were lovely.

We were flying along, pushed by heavy truck traffic but hanging out the windows anyways to take in the views and enjoy the scenery. Suddenly we passed a covered bridge — and we just HAD to do a U-turn to go back and see it up close. 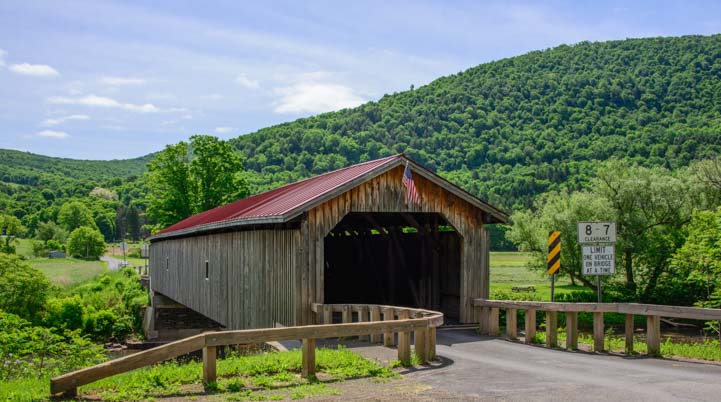 What a beautiful place to stretch our legs and breath deeply for a moment. This was the Hamden covered bridge, and we learned later that old wooden bridges were covered not so much to protect the people crossing the bridge, as I had thought, but to protect the bridge itself from the elements. 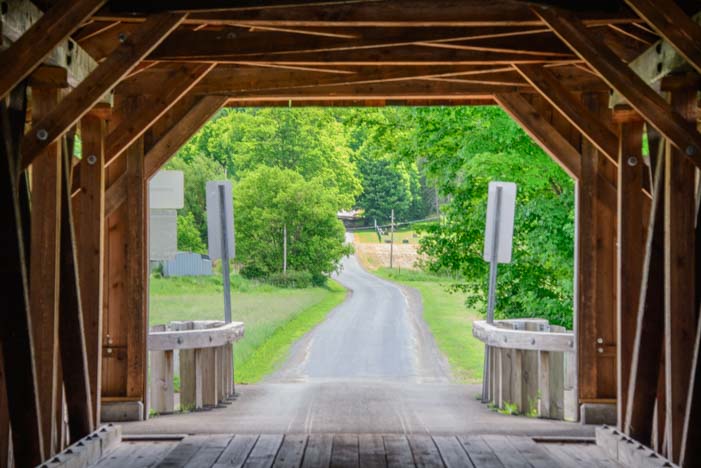 We walked through the bridge to beautiful views beyond.

This little piece of antiquity was built in 1859. We walked through and watched the view open up on the other side to a beautiful farmhouse set amid rich green fields.

A lovely farm just beyond the covered bridge. 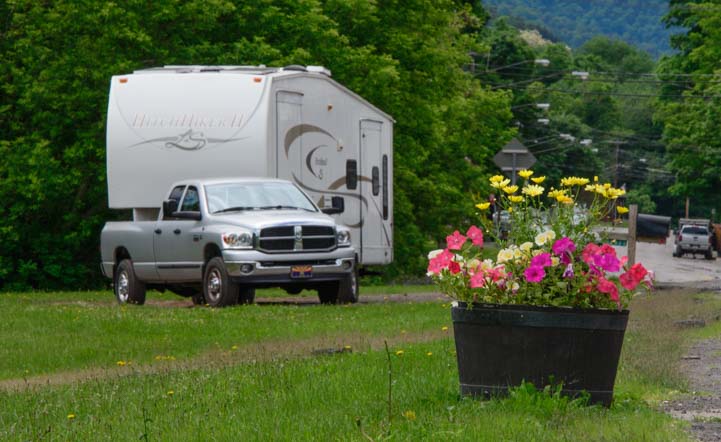 Hard to believe that New York City is just 142 miles away!!

Carrying on, we hopped back in the rig and continued east and north though the Catskills. These scenic roads are worthy of a leisurely drive, but we hustled down the highway intent on our goal of reaching Maine. Someday we’ll go back and spend some time really enjoying the beauty of this countryside at a slow pace. One surprise was that there were lots of scenic rest areas to stop for a quickie overnight.

Finding places for quickie overnights was easy. Lack of Verizon service so close to Manhattan was a big surprise!

Equally surprising was that we had no Verizon service for many miles and very iffy service for many more. It is hard to believe that this truly rural area is less than 150 miles from downtown New York City. I caught a handful of the fantastic farms with my camera out the window, but there were dozens of others that were far more beautiful that slipped by before I could capture them!

The pretty rural scenery made up for the craziness of driving these roads.

Our breakneck pace slowed for just a moment when we crossed over the border from New York into southwestern Massachusetts. A quick bike ride one morning through the village of Williamstown brought us to beautiful a white church that seemed to come right out of a New England picture book. 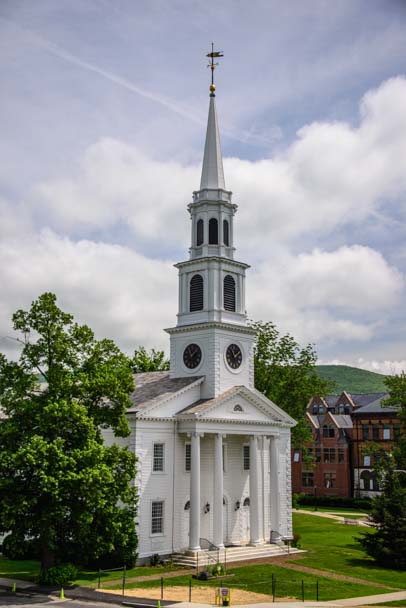 We paused again for a breather in Bennington, Vermont, where we met Nicholas, a motorcycle traveler who was on Day 1 of a six week trek across country from Maine to California. We watched in amazement as he strung up a hammock in the trees for the night. The next morning it was only 39 degrees out, but after a hot cup of coffee in our rig while sitting next to our toasty warm heater, he was fired up for Day 2 of his journey which would take him all the way to Philadelphia in a straight shot.

Before moving on ourselves, we were delighted to find out that Bennington, Vermont, boasts three covered bridges, and one of them was sitting in a beautiful bed of wildflowers. 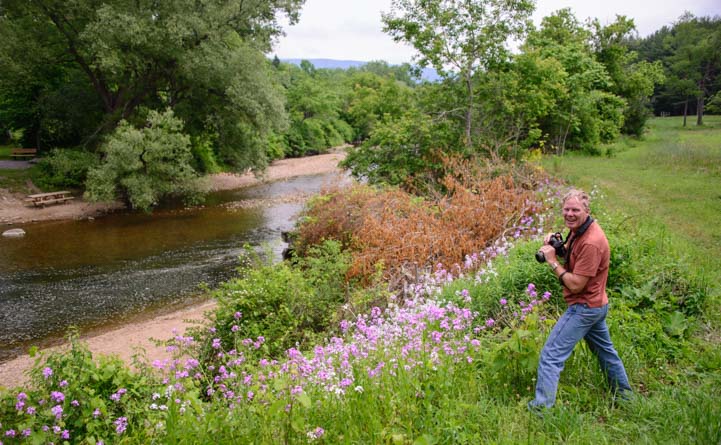 Mark is in his element shooting the Henry Covered Bridge in Bennington, Vermont 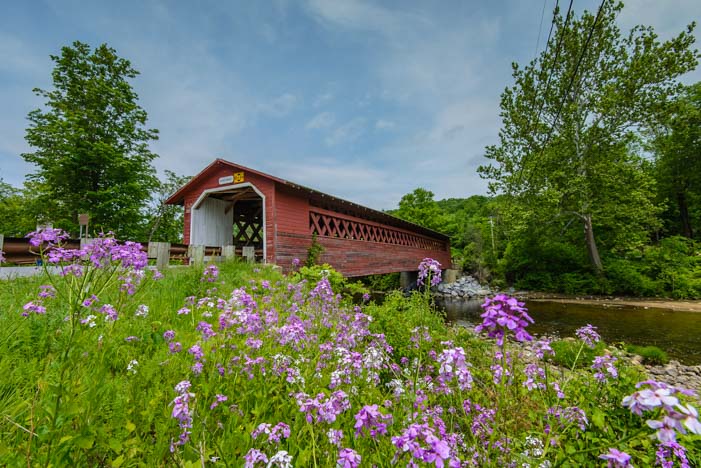 As we were enjoying taking pics of this bridge we heard the rumbling of a huge vehicle coming down the road on the other side of the river. Suddenly, this big old truck poked its nose through the covered bridge!

Where did this guy come from?

We had been quite startled by the amount of truck traffic on the small country roads in the northeast, but seeing this enormous truck squeeze through a covered bridge totally floored us. Ironically, a few minutes later an 18 wheeler pulled up to the bridge and stopped right in front of it with its flashers on. He sat there for a long time. Finally, he did a tight turn onto another road — he never would have fit!

We laughed that the truckers seemed to find these roads challenging too and that once in a while they even ended up in a tight fix just like we did!!

Moments later a UPS truck showed up, and he didn’t bat an eye as he barreled right through the covered bridge at full speed. Obviously, for him, going through this covered bridge was a regular part of his route! 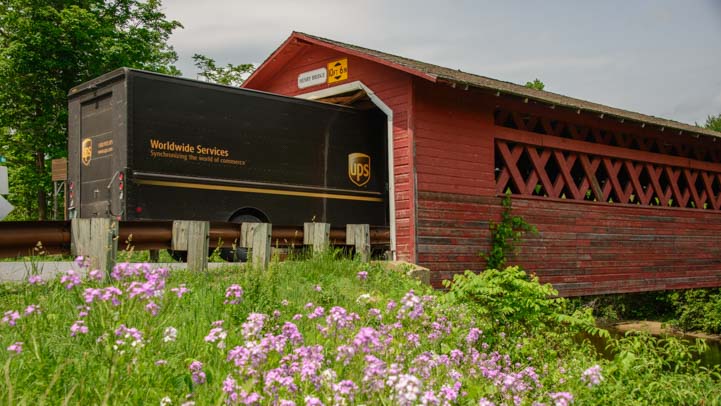 Geez, there goes another big truck. Trucks are used to tight squeezes around here!!

After a quick selfie and a chat with a pair of Spanish travelers from Mallorca who were photographing the bridge too, we packed up the rig and left Bennington. We soared up and over Vermont’s Green Mounains and then turned east to climb over the White Mountains of New Hampshire. In no time we had made it to Maine. 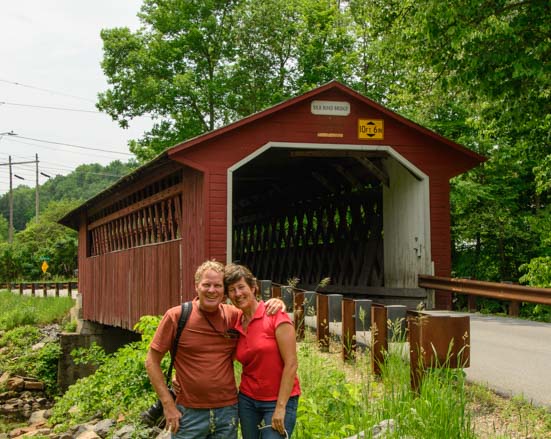 It was a crazy fly-by drive through the northeast,
but we were already finding lots of charm.

So far our travels in the northeast had been just a fly by, but once we hit the beautiful Atlantic coast of northern Maine we would slow way down. As their license plate says, Maine is “Vacationland,” and so it proved to be for us too.

9 thoughts on “A Farmland RV Fly-By at 55 mph – Highlights of the Northeast!”