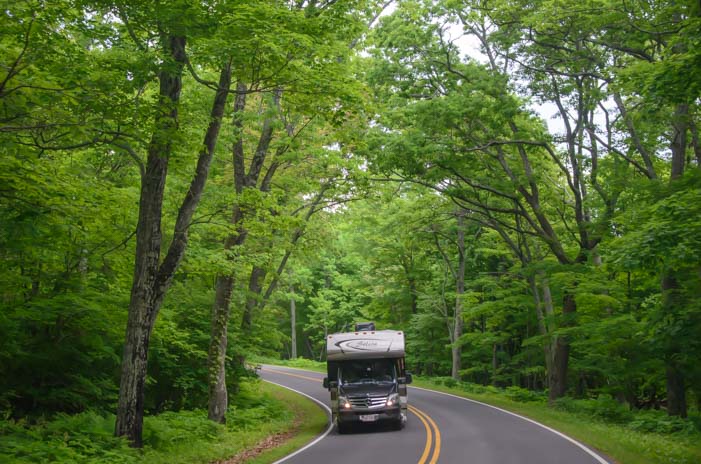 As we drove on Shenandoah’s Skyline Drive, we began seeing more rock faces on the sides of the road, and there were more open areas where the views opened up.

Unlike the Blue Ridge Parkway where many scenic overlooks actually have no view at all because overgrown trees stand in the way, Shenandoah National Park’s scenic viewpoints all feature a real view. We saw some lovely vistas of mountains fading off into the distance. This difference may be due, in part, to the fact that the Blue Ridge Parkway, which is managed by the National Park Service, is free for all travelers to use, whereas Shenandoah NP, which Skyline Drive traverses, charges the usual National Park fees.

“Thousands of tired, nerve-shaken, over-civilized people are beginning to find that
going to the mountains is going home.” — John Muir, 1914

When all the great national parks in the western states were being built in the early 1900’s, there was a desire in the eastern states to create a similar park that set aside beautiful lands and made them available to people for recreation. The tricky part was that most land was already privately owned. Shenandoah was created in 1935 through government acquisition of private land by eminent domain. Before it was even officially open, the crowds arriving from Washington, DC, and other nearby cities to enjoy the great outdoors were staggering. 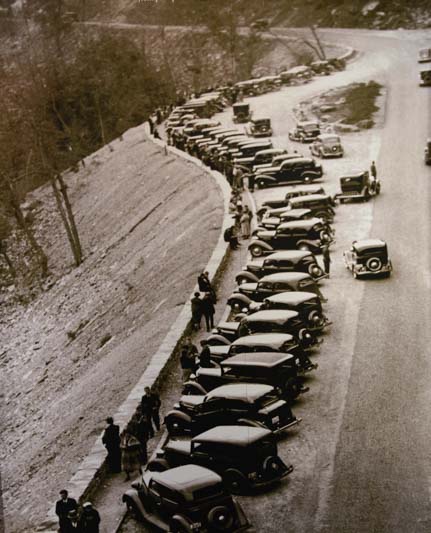 A Shenandoah scenic overlook circa 1935

The crowds can be overwhelming today too, and at a few of the hiking trailheads we found it was nearly impossible to find a parking space. Just like the Blue Ridge Parkway, this is a road that is loved by motorcyclists as well as motorists, and we saw many groups of them out having a ball on these twisty mountain roads. 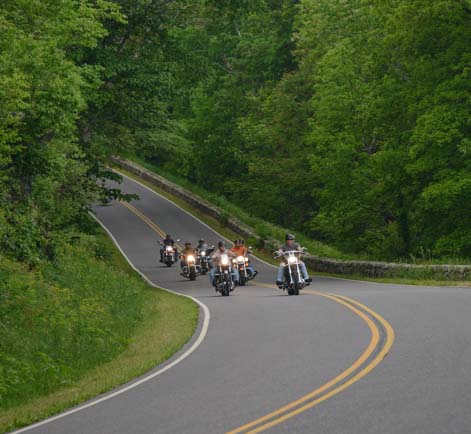 Skyline Drive is a favorite with motorcycles

There is still plenty of peace and quiet and wildlife in Shenandoah, however. We saw lots of deer, including one that sprinted across the road in front of us. Even more exciting, on one of our hikes Mark spotted a black bear just 100 feet from the trail. We both tried like crazy to get a good photo, but he kept his rump to us and a thousand skinny tree branches obscured our view of him. Oh well. It was still really cool to watch him going about his business in the woods. 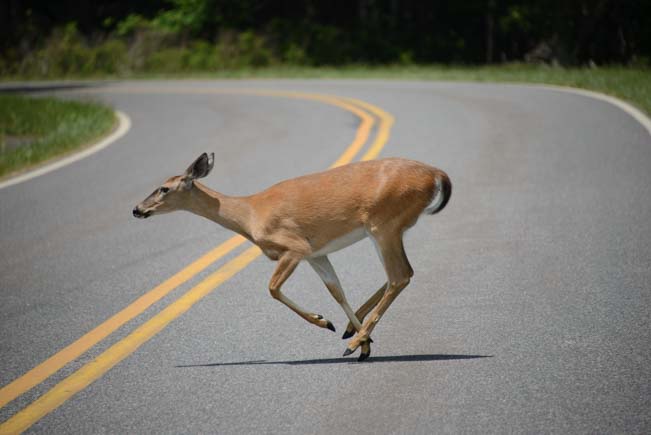 We saw lots of wildlife in Shenandoah

We decided to do one waterfall hike in Shenandoah to wrap up our waterfall theme on this leg of our travels. We had just about had our fill of waterfalls — who would have thought that was possible back in the Smokies? — but we had room for one more.

Dark Hollow Falls is a beautiful waterfall that has an upper section and a lower section. We hiked down from the top (although lots of people came via a different, easier route), and the view looking up at the upper falls was wonderful.

The upper falls at Dark Hollow

We were there on a Sunday, and the crowds were thick. People waited and took turns getting photos of themselves standing on the rocks at the base of the waterfall, and the trails were loaded with people of all ages. 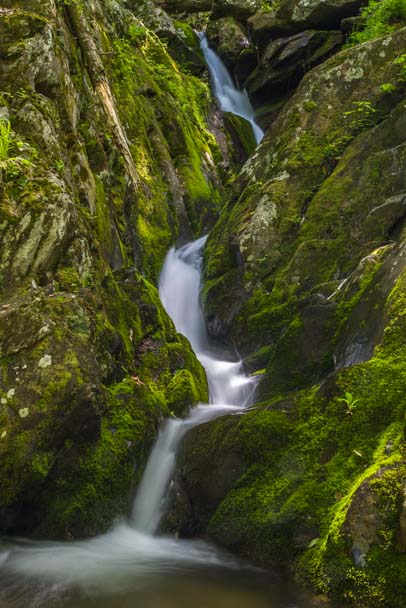 The lower falls at Dark Hollow

We also hiked to Mary’s Rock. This time we went midweek, and we were the only ones on the trail. There was a lot of activity in the woods around us, however. Squirrels made noises in the underbrush and songbirds filled the air with beautiful warbling. 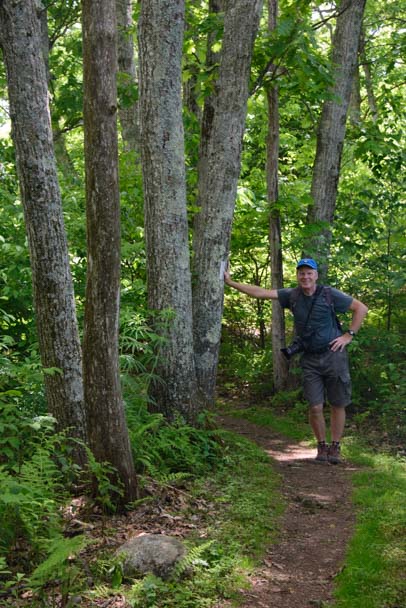 The hike to Mary’s Rock goes through some wonderful woods 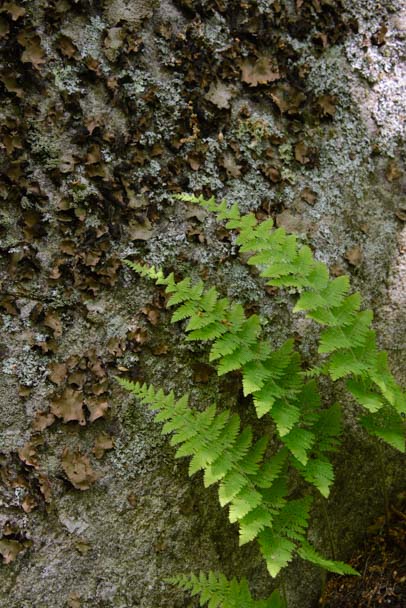 A trio of ferns against a tree 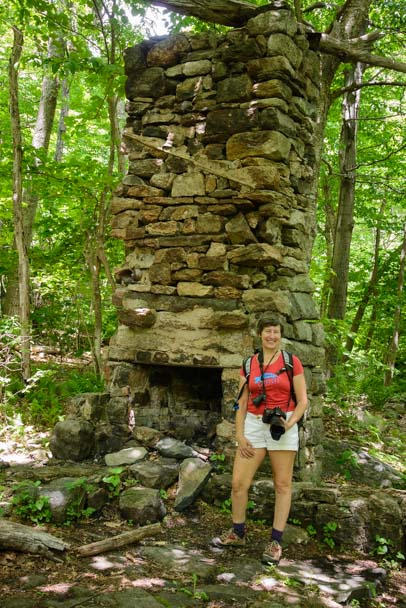 After taking a left turn near the end of the hike, the trail suddenly opened up, and we were staring at Mary’s Rock and the vast rolling green hills beyond and far below. 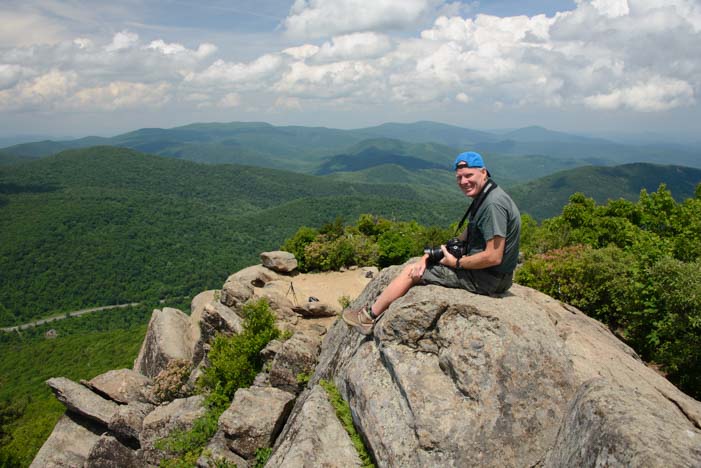 The summit of Mary’s Rock

There were lots of big boulders all around, and we had fun scrambling to different peaks and pinnacles.

There are great views from the tippy top!!

Mary’s Rock is at the north end of Shenandoah National Park, and this hike was our last foray into the ribbon of national park lands that stretches nearly 500 miles from Cherokee, North Carolina to Front Royal, Virginia. 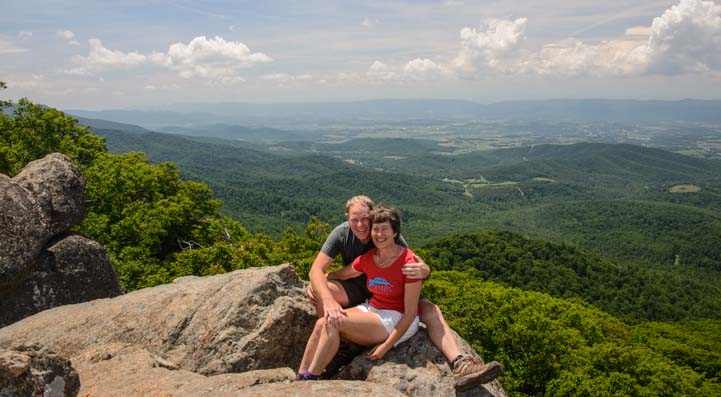 We had finished our nearly four week trek north along this unique strip of lush mountains, and as we put away our hiking shoes and camelbacks for the last time, we knew we’d barely scratched the surface of this rich area. We’ll be back for sure! But for now, it was time to switch mental gears to get ready for our upcoming summer RV adventures that awaited us far to the north. 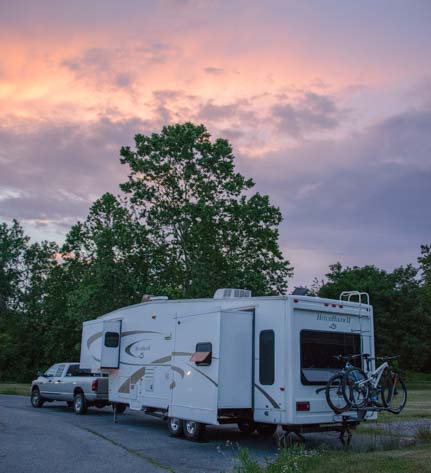 More info about these hikes:

Other blog posts from the the lush and beautiful Blue Ridge Range: