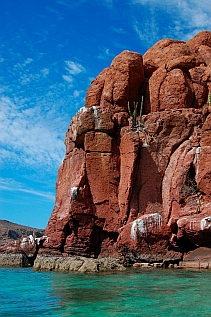 Red rocks and cactus at 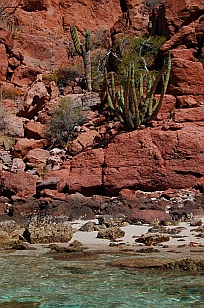 Cactus on the water's edge, at 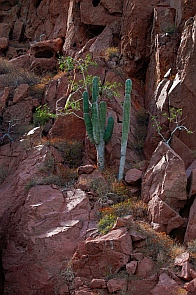 This could be Sedona, 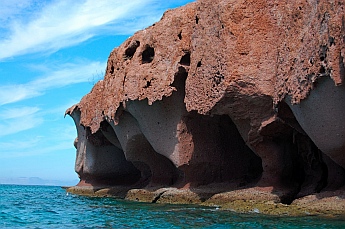 Unusual rock formations line the far edge of the bay. 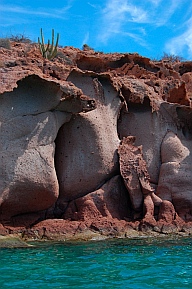 These cliffs dwarf the huge

cactus rooted on them.

The calm, clear waters of

A campsite for dive charters on the beach at Enseanda Grande. 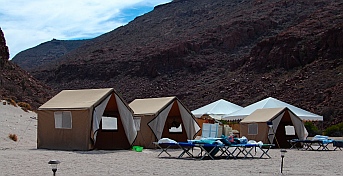 You can sleep in a tent or out under the stars. 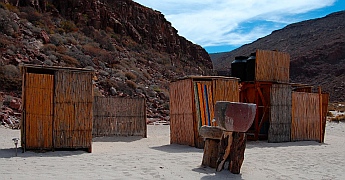 These funny little buildings turned out to be 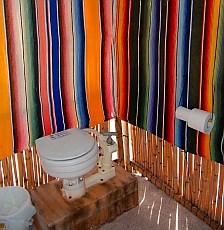 Not bad facilities for a beach camp

on a desert island. 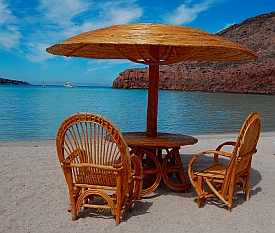 Divers kick back here to contemplate all

they saw on their Sea of Cortez dives. 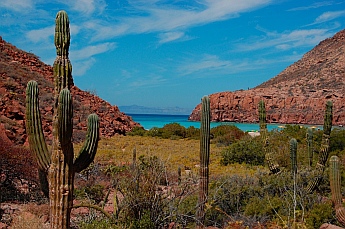 We wander up a wash and look back at the cove. 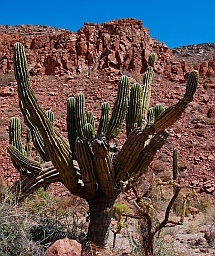 all over the canyon. 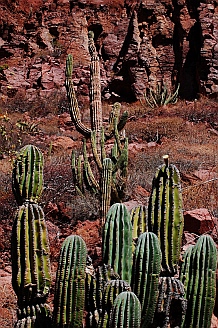 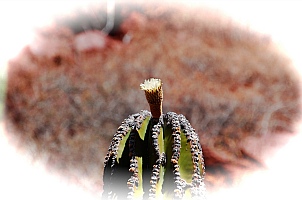 Bats pollinate these cactus at night.

As we hiked into the canyon

the heat and stillness erased

all thoughts of the ocean. 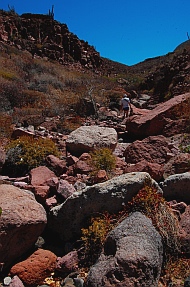 It is a bit of a stair-step hike. 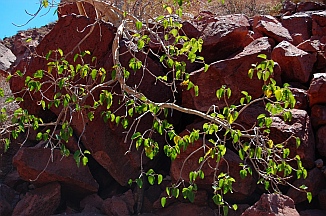 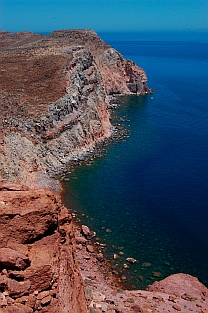 The hike ends at cliff's edge 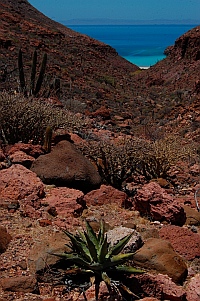 On our way back the view of Ensenada Grande grows larger.

Beach living at its best.

The anchorage opposite the "hook." 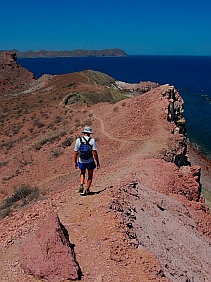 Hiking trail on the ridge of Isla 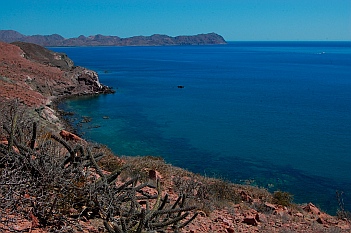 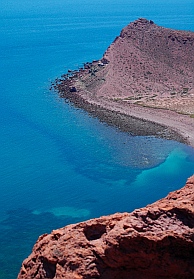 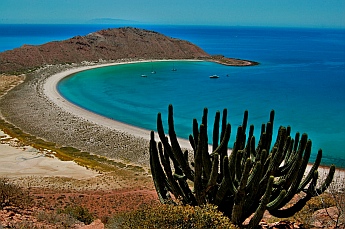 Ensenada Grande located on the west side of Isla Partida.

protected from the nasty nighttime south/southwesterly

Coromuel winds, and we tucked right up into a tiny cove

where we were well sheltered by red rock hillsides.

Looking at the scenic bay around us, it seemed we were

at the meeting place of the desert's most spectacular

We jumped in the kayak to see everything up close, and

moseyed along the base of the red rock cliffs.  Cactus

grew out of crevices in the rock, somehow eking out a

living from those few morsels of dirt that had gotten

wedged into the cracks.

The deeper water undulated turquoise green, while the

shallower water revealed all the details of the rocks and

fish under the surface.

On the far side of the bay the rock

out underneath by the wind and

waves, the rock cliffs were smooth

and rounded, as if shaped by a divine

hand working in wet clay.  On top of

the bluff the desert's crispy crust

seemed almost to drip over the sides

towards the water.  The tall cactus

seem small compared to the cliffs.

Leading up to the main beach the

water runs shallow for 100 yards or

more, rising and falling in a billowing

veil over the sand.  This is a popular spot for day and

weekend charters from La Paz, and during our stay we saw

an afternoon or an overnight in the bay.

We pulled the kayak up onto the beach and were very

surprised to find a little encampment perched on the water's

edge.  A Mexican fellow was singing Queen tunes as he raked

the word "Welcome" into the sand.  His name was Hernando,

charters.  Three large, rugged tents were set up with cots and

bedding.  True nature lovers could take their cots out onto the

beach and sleep under the stars.

Off to one side stood several homemade little shacks with

doors.  Peaking inside one I discovered it was a neat little

and a colorfully woven wall covering.

building, and he explained that

this place was used by dive

charter companies and was open

every day from April to

November.  Down on the beach

there were plastic lounge chairs

and some fantastic varnished

What a cool place to take a load off after a

reef dive in the Sea of Cortez.

Turning back towards the red rock canyons

behind the dive camp, we found a desert

wash running down from the mountains to

the beach.  Lush vegetation grew all around

and beckoned to us to

walk in a little further.

Wandering into the wash,

vigorous cactus.  As we

got deeper into the

canyon, the sounds of

the bay began to vanish, replaced

by the buzz of heat bugs

alternating with the intense silence

of the hot desert rocks.

We have been away from the

desert for so long it felt like coming home.  We happily

soaked up the dry heat, enjoying the feeling of the sun

prickling our arms.  The cactus were amazingly thick,

and as we walked deeper into the canyon we were

We had come ashore just for a quick look around and

were wearing water shoes and bathing suits.  This

place deserved a much closer look, and the next day

we came back dressed more appropriately for a

the Saguaro cactus, these guys get

pollinated at night by bats, so their

flowers are timed for nighttime opening.

The hike is a scramble up a boulder filled

wash, and it was a good little workout

stair-stepping our way up.  As the bay and

boats and beach receded behind us, we

became more and more certain that we were

deep in the Arizona desert, far from all

thoughts of oceans or water.

of water from the moisture that occasionally seeped down

the wash.  Lizards crawled on the rocks at our feet.

Finally the boulders in the wash gave

and we marched up and out of the

canyon onto a vast plateau.  Sensing a

stunning view just over the rise, we

picked up the pace to a near run until

we stopped short at the edge of a cliff

that hung out over the water below.

The Sea of Cortez stretched for miles

of blueness into the distance, and we

could clearly see every rock and

contour of the water hundreds of feet

After inhaling a few

As we walked the last few steps through the scrubby brush at the base of the wash, the dive

camp reappeared along the beach.  The scene looked so inviting, like a little slice of heaven.

The Coromuel winds continued to howl at 20 knots all

night every night, making the boat swing and sway on the

anchor line.  But we were close enough to the shore to

prevent any waves from reaching us, so we stayed flat and

One morning we caught the tail end of the previous night's

Coromuel wind for a ride up to Isla San Francisco.  With

the breeze at our backs we romped along steadily at 8

knots, exhilarated to feel the boat surge forward in

response to even the slightest puff.

huge circular hook and is lined with a thin white beach.  We took our

position among the collection of anchored boats and then just stared

at the shore for a while, mesmerized by the colors and the view.

smooth green water lay before us.  The island begged to be explored,

ridge trail that snakes along the hills at one end of the bay.  What a

to the Baja mountains on the horizon.

There is another anchorage on the other side of the

island, opposite the favored "hook" anchorage, and it is

easily visible from this ridge trail as well.  We pranced

along the skinny footpath, meeting the crews from

several other cruising boats and charter boats along the

way.  This place is "not to be missed" and few boats

coming up from La Paz ever miss it.

During our stay we connected with the crews from two

bareboat charters.  One was a young couple form

Vancouver Island aboard a McGregor 26 for a week.

After seeing so many heavily outfitted 40' cruising

sailboats driven by grey haired retirees, it was refreshing

to see these two kids in a little boat arrive in the anchorage.

Their sailboat was outfitted with just a simple outboard

engine, tiny solar panel and mini-fridge, but what a blast

they were having.  They swam and snorkeled with

abandon, and when we invited them aboard Groovy for

cocktails along with some other cruisers, it was soon

evident that even at their young age they were more

experienced sailors than many cruisers.

the Moorings too.  The

one with the Swiss

family aboard was our favorite.  They were celebrating their 20th anniversary and sharing

the moment with their four young teenage and pre-teen children.  The mom and dad were in

and out of the water as much as the kids were.  Sunbathing, reading, teasing each other,

and pushing each other over the sides, this family made the most of every day.  They were

nights.  Like the other young charterers, they were seasoned sailors, and had chartered all

over the Mediterranean and Caribbean.  We were impressed when they headed out for an

afternoon daysail and sailed off their anchor with ease, rather than using the engine.

Watching these exuberant vacationers was

inspiring.  It is easy, after living this lifestyle for a

while, to forget just how special each day is.  When

Mark stood on the swim platform for a very long

time one afternoon, debating whether or not to

brave the cold water, I reminded him, "Hey, those

folks on the charter boats wouldn't think twice..."  With

a loud splash and a gurgled shriek, he hit the water

and bounced back to the surface

Isla San Francisco has another

hiking trail that leads up to a higher

peak.  This trail is not used too often,

and after passing a few rock cairns

that marked the start of the trail, we

were soon scrambling up an

At the top we were rewarded with

marvelous views that were well worth

the dicey descent that followed.

began strategizing which anchorage would offer the best protection,

a bit north of us, we knew we would be challenged to find a good

going soon.  Looking back with 20-20 hindsight we now realize we

should have stayed put at Isla San Francisco for another week, as it

offers the best north wind and wave protection in the area.  But we

didn't, and we were soon in for a wild ride before we found paradise