The Soo Locks are the four waterways to the left. The

largest lock, the Poe, is second from the left.

A small powerboat enters the lock from Lake Superior.

can tie up to the side of the lock during its descent.

The water has drained out of the lock and the gates

open so the boat can emerge onto Lake Huron.

long time to get it situated in the lock.

The gates open for Maritime Trader, a smaller 670'

freighter which has shown up on Lake Superior.

Maritime Trader glides into the lock.

Line handlers appear on deck and on shore.

These guys make it look easy. 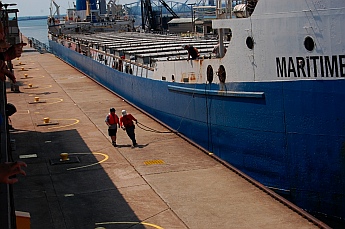 A line is walked towards the cleat on shore.

A line handler loops the line over a cleat.

Additional lines are led to other cleats.

Almost ready to close the gates behind the Maritime

Trader, we can see the bow of the Walter J. McCarthy

in the next lock over.

from Lake Huron to Lake Superior.

The bridge towers over the back end of the ship.

The McCarthy rises higher and

higher while the Maritime Trader

The McCarthy emerges through the doors of the lock

McCarthy steams off into Lake Superior.

Meanwhile, Maritime Trader turns on its engines and

Maritime Trader heads off on the rest of her

boats of old, we took a trip to the Soo Locks where modern freighters

region to another.  Some 11,000 freighters ply the waters each year,

2008 shipping was down 45%).  Lake Superior sits a little higher above

sea level than all the other lakes, and in the early days of the fur

trappers, the only way to get your canoe from Lake Superior to Lake

Huron was to carry it past the rapids of the St. Mary's River.  This

float between Lake Superior and Lake Huron, and eventually the French

Locks.  As we stood there waiting for some action, suddenly a small

open powerboat with four people in it drove into the lock.

boat and a line handler gave them a line to tie onto their boat.

the lock into Lake Huron.  Eventually the gates opened at the other end

Huron.  What a cool excursion for them!  It had taken all of 15 minutes

or so, and we found out later that for recreational boaters transiting the

locks doesn't cost a dime.  Just show up and the magic happens!

We were satisfied to have seen Soo Locks in action, and we were

about to leave when the lady at the visitors center said, "You really

should stick around.  There are going to be two huge freighters in

these locks at the same time in about an hour."  One of the ships

of just forty ships of that size that works the Great Lakes.

Before long, the McCarthy showed up in the distance,

gliding towards us from Lake Huron.  It would be

entering the Poe lock, the largest of the locks and the

second lock out from our viewing area.  It was traveling

from Lake Huron into Lake Superior, so it would be

riding the lock system's "elevator" up 21 feet to the

It fit very snugly into the lock, and the handlers took an

especially long time getting the ship situated before they

closed the doors behind it.  It looked to me like there was

and the doors at either end of the lock.

a smaller ship of

and the ship slid into

The line handlers on the ship and on

the shore loosely looped the lines

around enormous cleats.  It all

seemed very casual and easy for

them, but the hundred or so people in

the viewing area were all hanging

over the railings, excitedly snapping

Once positioned correctly, the doors

of the locks were closed behind the

Maritime Trader, the water began to

drain out of the lock, and the ship

slowly descended to the level of Lake

Looking across the deck of the

Maritime Trader, we could see more

and more of the McCarthy in the

next lock as water filled that lock

and the ship was raised to the level

Eventually, the water in the lock holding the McCarthy was even with

the water of Lake Superior, the doors of the lock opened, and the

Simultaneously, the Maritime Trader had descended all the way

down, and the doors of its lock opened onto Lake Huron.  The water

the opposite direction onto Lake Huron.

A few days after we left the Soo Locks, construction crews

years while the two oldest and smallest locks are rebuilt into a single brand new big one.  Only

one of the three currently active locks can handle a 1,000 foot ship (the lock where the McCarthy

had been), so this new lock will allow more of the 1,000 footers to get between the two lakes.

Interestingly, the same thing is happening at the Panama Canal.  Rather than three single lock

Canal is a huge system of three

channels that moves ships through a

series of 26 locks separated by a lake.

It takes the ships up 13 levels through

the first 13 locks, sends them across the

lake under their own power and then

lowers them 13 levels through 13 more

locks to the ocean on the other side.  In Panama, a new lock system is

Our visit to the Soo Locks capped off our time in the Upper Peninsula.  It

was time to make our way south again, this time along Michigan's eastern

coast where we visited some choice shoreside spots along Lake Huron.