This driveway is so steep the owner

put a staircase in the middle. 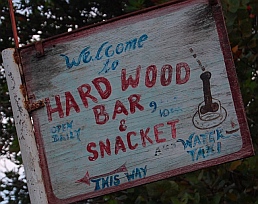 A beautiful spot for breakfast.

A fruit and vegetable stand in Hillsborough, Carriacou.

A basket of breadfruit.

Bananas ripen on the vine.

Steps up the tree to the coconuts.

The view across from the now-defunct Coconut Beach Bar.

Driftwood on the beach.

Traipsing through the thick brush.

The Coconut Beach Bar, once a little slice of heaven.

Open for business, this shipping container is transformed

into a t-shirt shop.

All over Grenada and Carriacou, solid concrete homes

An iguana suns himself on the wall nearby.

Late December, 2009 - Unlike our more urban setting on Grenada, on the island of

on the island.  We fell out of bed into the water everyday and had a hard time pulling

ourselves off the beach to go sightseeing.  For such an exquisite beach, dotted with beach

bars and simple accommodations for travelers, there was hardly anyone there.  At any given

time there were at most 10 or 12 people on the whole mile-long beach, mostly locals.

Finally reaching our fill of beach time, we took a few long walks around the south end of the

island.  Like all of the Grenadines, Carriacou is very hilly.  One driveway was so steep that

the owners built a staircase in the middle of it.

We walked into the town of Hillsborough to get

groceries and change some money at the

bank.  The sounds of goats bleating and

roosters crowing accompanied us all the way to

equally thick bunches of hummingbirds to their

nectar.  The birds were very dark and had

small crests.  We got a big kick out of the many

signs on the storefronts.  The Hard Wood Bar

and Snacket had a most unusual logo, which

must have stood for "hard wood."

their licenses to sell liquor and spirits as well.  One

There were wonderful murals and

signs with elaborate paintings as

well.  One industrious soul had

wall with images of everything sold

inside, ranging from TV's to power

drills to computers to hammers

The buses and many cars

were given names, and often

offered something of a

statement of the driver's

The island is so small we saw many of these

minibuses over and over in just a few hours of

walking.  We recognized "The Lord Reigns" as the

bus that had taken us to our apartment when we first

got off the ferry.  Inside it was festooned with images

Even the boats are named, many operating as water taxis.

very well, so we had

time we got to town

Our breakfast at an

jetty was so good!  A

watched us eating, their beady little yellow eyes following the

food from plate to mouth, waiting patiently for scraps.

Out in the harbor a schooner floated on the horizon.

items that are unique to this area.  Grenada is the number two

nutmeg producer in the world, and they have found many uses

for it besides a powdered spice.  We were amazed to see

"Nutmeg Syrup" alongside the honey.

The ferry had just arrived when we got to town, and boxes of produce

were being unloaded.  Several makeshift fruit stands were immediately

set up near the ferry dock.  They sold the familiar imported apples from

northern states, but they also sold a lot of things I didn't recognize.  A bin

of red fruits the size of strawberries turned out to be "Sorrel," the hips of

hibiscus, which are ground and then steeped in boiling water with sugar,

cinnamon and other spices to make a refreshing drink.

I haven't had a glass of sorrel juice yet, but I did have a

apples are the shape of a kiwi, but hard like an apple,

with a soft skin you peel off and a pit in the center.

Green ones are unripe but make a great juice drink.  A bin of breadfruit

exotic fruits are prepared and eaten.

Walking back, we passed thick bunches of bananas in all stages of

ripeness.  When I sampled one I could not believe the richness of the

flavor.  I have never tasted a banana like that -- something gets lost in the

A little further on we passed a

steps nailed into it.  This makes it

much easier to reach the

Carriacou is a desert island,

unlike neighboring Grenada, and

has been experiencing a severe

drought in recent months, it

seemed to us a very lush tropical land.

On our walk to town we ended up taking the

"long route" by accident, coming up on a

junction called Six Roads and having to ask

another walker which road would take us to

town.  When we checked the island map it

was clear we had walked way out of our way

and covered a lot more ground than

necessary.  A better route lay along the shore.

So we took that route back.

The road had absolutely no cars on it, and the only sound was

the wind in the palms and the waves on the sand.  It was a

stunning strip of oceanfront land.  This bit of ocean faces the

Caribbean Sea and it is unprotected open water, so there was

beautiful driftwood strewn along the shore.

Suddenly the road turned away from the sea, and we passed a

sign saying, "You are now leaving Carriacou."  Huh?  Then the

road dead-ended at a tiny airstrip.  We poked our heads inside

us.  They were dressed in pleated shirts and striped pants and

were carefully guarding the international border doorway and

customs inspection area that stood between us and them.  We were in

shorts with sandy feet in thong sandals, our cameras slung around our

necks, and arms loaded with groceries.  No planes were in sight and

none appeared to be due any time soon.  "Does the road get around the

airport somehow, or can we walk across the airstrip?"  We asked,

pointing to the map that showed the road crossing the runway.  "Not any

more.  You have to go back the way you came or go around the point."

Arrrgh.  We tromped back to the shore and looked out at

the point.  The waves came up to the trunks of the trees

all around it, pulling back just long enough to expose a

thin line of wet sand.  It was either brave the sand and

road, so we went for it, dodging in and out of the trees

and running as each wave revealed a little sand.

Suddenly an opening appeared in the trees, and we found

something of a path.  Crouching under some tree limbs

and clamoring over others, we made a circuitous route

through the thick vegetation and finally came out at the far

end of Paradise Beach, our beach.  It had been a direct route on the map, but it sure made for a

Just before our jungle excursion we had seen a sign: "Coconut Beach Bar."  Passing it, we saw it

must have been a terrific place at one time, complete with thatch roofed ramadas and benches

and a little homestead for the owner.  The view from the beach bar was stunning.  Union Island

beach with swaying palms spread wide across the foreground.

Mark was all set to buy the place and set up shop.  Wouldn't that be fun.  But Coconut Beach

the other side of the island.  Once the road dead-ended at the airfield there was little reason for

anyone to come this way unless they were catching a plane.

The beach bars on Paradise Beach were thriving, however.  A few catered to the visiting

yachts and were always filled with white, ex-hippies who live on sailboats in the Caribbean.

Another was definitely a local hangout:  Banana Joe's Bamboo Brunch Bar.  There was

always a crowd at this place, and they always seemed very mellow.

Another beach bar sold "the best pizza in the

Caribbean," according to one couple.  The little

chairs under the thatched cabanas looked so

The entrepreneurial sprit is alive and well on

Carriacou.  We never saw any beach vendors on

Paradise Beach, but there were many tiny shops

set up here and there.  One woman sold

souvenir t-shirts out of a shipping container.

When we first saw it all locked up we didn't think

anything of it.  It was painted pale blue and

somehow blended in.  But when she threw the

doors wide, suddenly she was the proprietor of a

Another home looked very orinary with its doors

closed in the early morning, but a few hours later,

once the merchandise was hung all over the

outside, the house transformed into a ladies' dress

Lots of people were very creative

painting the outsides of their buildings.

There seemed to be great pride taken

in having a fresh coat of paint on your

with a bright glossy

We loved every minute of our

walks around Carriacou, and we

had several planned that never

materialized simply because our

home-base was so spectacular.

The beach drew us to its lapping

waves and warm waters every

day, and wouldn't let us out of its

Our balcony was an ideal spot

to unwind.  Gazing around

that seems to wash over

visitors to this dreamy isle, we

suddenly noticed there were

themselves on the wall next to

us.  I'm not an iguana expert,

but they did not look at all alike.

They both had impossibly long toes, but one was much

bigger than the other and didn't have the long dangling chin

Once those guys slithered away, our attention turned back

to the water where a huge mega-yacht had taken up

residence for the evening.  This mammoth black-hulled

beauty sat quietly on the horizon while it summoned water

taxis to its side.  From around the point water taxis would

mega-yacht for a few moments, handing things up to the

service staff on the yacht.  Then the water taxis would

disappear back to their homes.  We figured the guys on the mega-

yacht had called for more of cases of beer, or for pizza from Curtis's

on the beach.  What a life.  With Tiger Woods dominating the news,