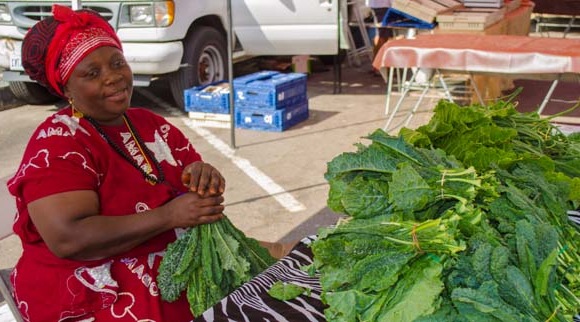 The Bahati Mamas are reaping a bountiful harvest from all that they’ve sown.

We love going to farmer’s markets, and we’ve made a point to go to the one held each Sunday on Shelter Island while we’ve been staying here in San Diego.

It’s a small market, taking up just a short side street, and they have the usual assortment of home-made honeys, jams, beautiful veggies and fruit juices with a good mix of made-to-order Mexican tacos thrown in for good measure.

But what caught our attention the first week we went was the bright red dress and matching head kerchief worn by a an African woman.

She was sitting behind a table that was piled high with bright green leafy veggies, and the colors lured us over.  We smiled at her and came a little closer.  She was busy tying the leaves into little bundles, but she looked up and smiled back.

These were the most lush and crisp looking greens in the whole market, and I said so to her.  “Yes.”  She replied softly.

I noticed a large sign nearby and began to read it, and quickly became absorbed.  It turned out she was one of a group of 11 women farmers called the “Bahati Mamas.”  Bantu refugees from the war in Somalia, these women had been gifted with a second chance at a new life here in America where they had been taught sustainable farming techniques and farm business management.

I looked back at her — a big, jovial and very dark woman dressed in vividly joyous red.  I asked her about the farm and the produce, but when she quietly answered “Yes” a few times in a row, I realized she was probably struggling with learning English the same way I have been with Spanish these past three years in Mexico.

The sign said that “Bahati” means “Lucky” in her native language of Kizigua, and that this group of women had been fortunate enough to come into this farming opportunity after nearly 17 years of living in refugee camps.  Many of them were single moms, as their husbands had died in the conflict.

Their produce is all sown and grown by hand organically, but because of the high cost of obtaining a USDA Organic Certification, it doesn’t carry that official stamp of approval.  They lease their land from the farm where they were taught, in the Pauma Valley at the foot of Mt. Palomar outside Escondido.

I found all this very moving.  The other California farmers at the market all had lovely things to sell too, but this woman had an amazing history.  I just wished that she and I shared the same words so I could hear the rest of her story, as she would tell it.

The following week we returned to the farmer’s market, and this time a different vendor caught our eye.  We had hustled through the market fairly late in the day, and many booths were shutting down.  But at the far end there was a booth with what looked like a painting of a bird on a stand out front. 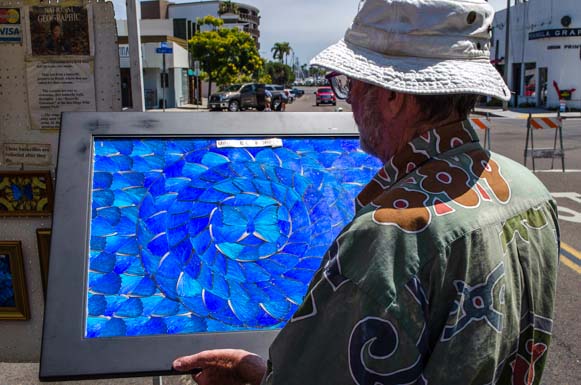 We drew in a little closer and saw that this beautiful “painting” of an owl was actually made of something very feathery.

I looked up and saw another “painting.”  It was labeled “The Miracle of Morpho” and was an abstract series of circles of the most brilliant, iridescent blue.

An old man approached us and said, “Those are all butterfly wings.  They come from Morpho butterflies in Brazil.”

We did a double-take and stared at the painting closer. Each wing was easily discernible, but the patterns had been so meticulously matched that they seemed to melt together.

“The butterflies are raised in a sanctuary and the wings are discarded when they die.” He continued. “So I collect them.  I’ve been doing it for 40 years.  I thought that by creating artwork from the wings I might help the local people and perhaps help stop the deforestation there.”

We stared at this small man in astonishment.  Butterflies? Brazil? Deforestation? Art?  It was an impossible mix.  He pointed to a photo of an enlarged newspaper clipping on his wall.  “Johnny Cash was a big collector of my art.”  Sure enough, there were Johnny Cash and June Carter standing with a much younger version of this man, holding an artwork similar to the pieces in this booth.  “Brenda Lee was another collector.”  We moved closer to read the various newspaper clippings that hung on the wall.

The only blue butterflies I’ve ever heard of are from Australia, and I mentioned something about that.  “Oh yes, I’m from Australia, but these are Brazilian Morphos”  He said.  We hadn’t detected that he had an accent, but as he continued we found out he was raised in England and served as an engineering officer in the British Navy, sailing up and down the east coast of the Americas many times.

He had had a fascination with butterflies from an early age, and when he saw an opportunity to make use of the wings that were otherwise discarded, and possibly help the local people at the same time, he leaped on it.

We studied his other pieces.  Each was so delicately rendered, with the wings placed perfectly to form a mosaic of intricate colors and patterns that melded into abstract images, and owls and macaws.  It was beautiful.

“I’m retiring now.”  He said simply.  “Everything you see here is the last of my work.  Once it’s sold, I’m done.”  I asked what would happen to the wings now and if anyone was following in his footsteps.  “I don’t know.  I was the only butterfly artist that I know of.”

We studied each of his beautiful pieces, caught up in many many thoughts.  As we moved to leave, he had become busy with another customer, and I realized I had forgotten to ask his name.  But I did notice a sign on his wall saying, “M. Highton.”

We left with our hearts elevated and soaring. When we got home I hopped on the internet and found only a tiny bit of information on this very unusual artist.  How amazing it was to see that in April 2000 the PBS TV show Antiques Road Show valued one of his pieces at $10,000.  He was selling identical looking work at this farmer’s market for $998, the same price the person on the TV show had paid for his piece.

How fun to find such jewels on the back streets of San Diego.  In a scant two weeks, this little farmer’s market has given us two very uplifting and unique experiences that went far beyond mere vegetables. We will definitely be back!  I wonder what kinds of special people we will meet selling their wares next time?