The RV Show in Quartzsite, Arizona, is one of the biggest and wackiest RV shows around. Selling everything from hydraulic leveling systems to Good Sam Club memberships to Watkins spices, it is the focal point for thousands of RVers who come from all corners of the continent to camp out in the desert for free and check out the latest and greatest in the RV industry’s offerings.

Quartzite itself is a totally funky and quirky place, full of interesting characters and odd sightings. We got a flavor of that from a few signs we saw outside business establishments on our way into the show.

Parking is at a premium during RV Show week in this tiny town, and traffic is a dusty, snarly nightmare on the dirt roads that run between the flea market tables around the outdoor edges of the show. We had to laugh when we saw one exasperated vendor had put up this sign on the edge of his outdoor booth:

People from all walks of life flock to Quartzsite in January, and everywhere you go around town vendors are peddling anything and everything they can. The tiny town’s streets are overloaded with folks hawking goodies off open air tables under makeshift tarps. From pizza to homemade ice cream, food vendors had it all, and a pair of street musicians set up shop just outside the show entrance.

Serenading show goers outside the show

There was good music inside the show too, and Johnny Goodrum, whose karaoke style crooning we remembered from our visit to the RV Show six years ago, kept the massive crowd happily entertained with his mellow karaoke style songs. 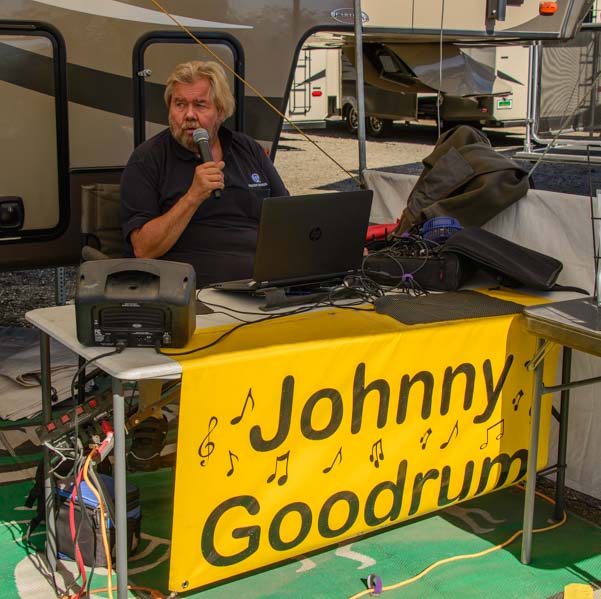 Music inside the show!

Did I mention the crowd was massive? It was shoulder-to-shoulder, hip-to-hip throngs of people as far as we could see down every aisle, both inside and outside the big RV show tent. We shuffled along at a snail’s pace, watching salespeople demo everything imaginable. One of the first booths we saw was selling induction cookware, a boon for RVers who don’t want to heat up the inside of their RV on hot summer nights. This electric cooking system uses the magic of electro-magnetism to heat food without making the burner itself hot. It is fantastic if you have electric hookups but might be tricky for boondocking, as it draws over 1,000 watts, a big drain on the batteries.

The RV Show is as much a lifestyle show for the senior set as it is a show for RVers, and along with practical goodies for RVing, there were all kinds of anti-aging elixirs promising a sip from the fountain of youth. Lotions and potions and drops of snake oil were in abundance. They could make wrinkles disappear, stop snoring, and put an end to migraine headaches. Foot baths detoxified your body and massage chairs relaxed aching muscles.

“I can fix your pain” One vendor called out to me as I passed.

“But I don’t have any pain!” I laughed back. 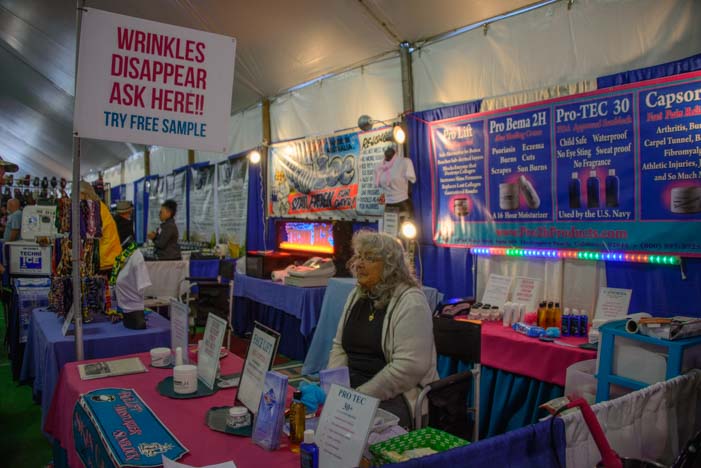 If a salve, or pill, or magic powder in a drink wasn’t to your liking, there was a hair salon booth that would happily give you a new do! 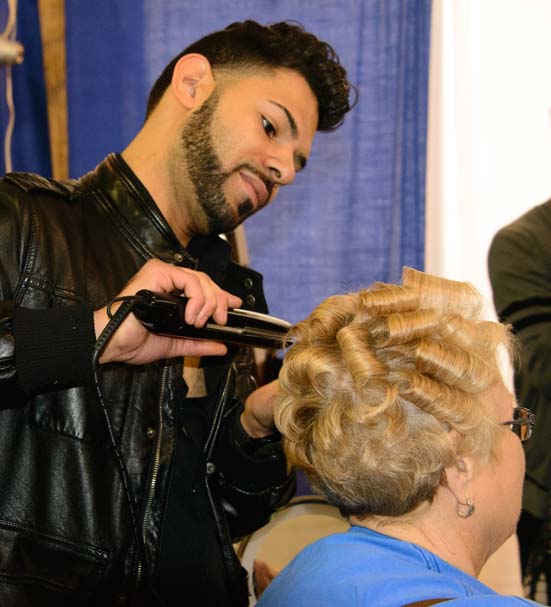 Get a new hairdo at the RV Show!

Lots of these booths had images of very happy older people looking quite young, but we were really taken aback when we saw a huge image of the svelte, bare mid-section of a young woman who was definitely not a card carrying AARP member just yet. Something about the almost provocative photography and the large amounts of skin showing on all the people kept my eye scanning the photos around this booth, and then I saw why. This was the booth for the American Association for Nude Recreation. And the salesman had a huge grin on his face!

Why is this man smiling?!

“You meet the nicest people at the nude RV parks,” he was telling me as my eyebrows shot up in my head. “It’s impossible to be a jerk when your naked.”

Is that so? Well, I imagine that must be true…!

He suggested we stop by one of their 260 affiliate resorts and try out their special brand of freedom — a nakation! He went on to say that the AANR has been encouraging folks to get in touch with their own naturism for 84 years, and they now have over 200,000 members!

When I got back to the rig, I just had to check out their online logo-wear clothing store… what exactly would they sell? Ummm… jewelry??

Buffs of going in the buff weren’t the only unusual attendees at this show. Dogs were in abundance. Most were wearing their natural furry birthday suits, but quite a few wore sporty jackets, and many of them never let their paws touch the ground. Dog lovers carried their pups in kangaroo pouches and other cuddly hugging sacks, and a huge number of adorable dogs were pushed and pulled around the grounds in strollers and wagons.

I knew the RV show was going to the dogs stood when I reached into a freebie candy dish at one booth and pulled out a dog treat! 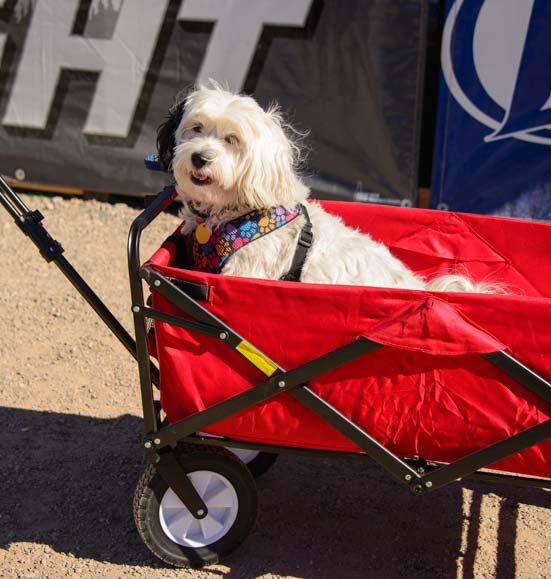 Riding around the show in style 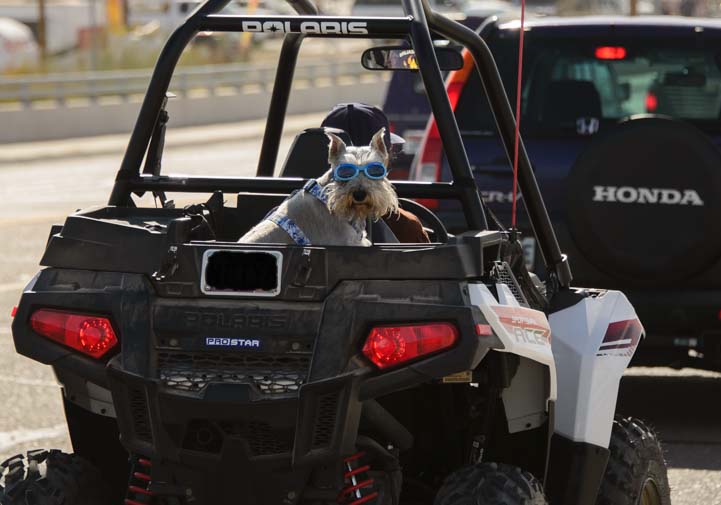 For animal lovers that didn’t have room in their lives for a canine companion, perhaps the funniest and most endearing booth at the show was the Sugar Glider display. This wasn’t some kind of fancy lazy susan to pass the sugar around the RV dinner table. These were adorable little marsupials that come from the rainforests of Indonesia and Australia.

Ever heard of a sugar glider?

A sugar glider breeder, who clearly loved his pets and his job, was very busy capturing peoples’ hearts as he showed the way these unique animals snuggle in your shirt and leap great distances (like a flying squirrel) from person to person. He explained that they are ideal pets for many folks because they sleep all day and want to hang with (or on) their owners after work in the evenings.

I was amazed when he described his breeding facility. He has a dedicated 2,000 square foot building for 400 breeding pairs of sugar gliders. They are the size of a grain of rice when born, and they spend 11 weeks in mom’s pouch growing from a virtual embryo into a furry little animal. They can glide for 150′ between treetops in the rainforest canopy, and a skydiver even released one at 10,000′ and glided alongside it (just inches from his hand) until they both reached 1,000′ when he tucked him back into his pocket! 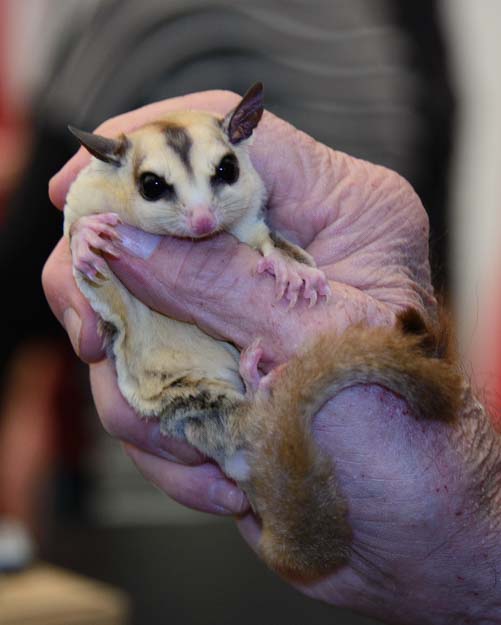 But between all these crazy booths, there were some things for RVers (and homeowners) that seemed really useful. One fellow was demonstrating the ShamWow towel. We have a few of those, but we discovered we had been using them wrong! Unlike a normal towel that you use dry to mop up wet things, the ShamWow has to be wet in order to work. You soak it, wring it out, and THEN place it on your puddle of spilled wine or coffee. Only then can the magic begin to happen. Who knew? 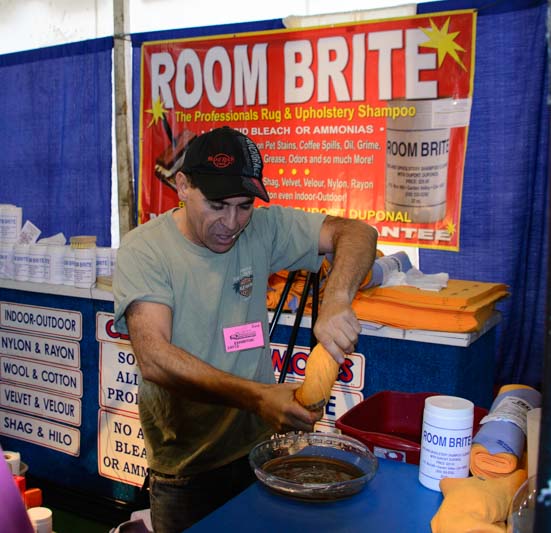 Moisten your ShamWow towel before using it!

Another guy did a fabulous demo of a miracle doormat. He was wearing big rubber boots and had a pail of very muddy water that he swished his feet in. Then he’d take two steps across the mat onto a clean sheet of paper (without wiping his feet!), and there wouldn’t be a drop or hint of mud on the paper, not even an outline of a footprint!

I watched him do it several times and then tried it myself. I asked him how it would work with dust since that is our biggest nemesis in our trailer. He said it would work great. So out came $40 from our wallet for one of these doormats. How could we resist??!!

And does it work? Well, we just had three days of muddy, rainy, yuck in Arizona, and our floors are clean. The trick, though, is that this floor mat has to be washed first. We tried it when we first got it home, and it was okay, but not super effective. Once we ran it through the washer (letting it drip dry in the sun), it worked just like we saw at the show. Pretty darn cool!

One step on this doormat cleans the bottoms of those muddy boots!

Another nifty product we saw was a slick folding portable solar power kit. This would be ideal for RV weekenders and vacationers who want the freedom of solar power but don’t want the hassle of doing a permanent installation on their RV roof. The cool thing about it is that the two panels fold together into a hardshell suitcase that is easy to carry and has a built-in handle.

This clever foldaway system also protects the panels, so they won’t get damaged when you store them. When you set the panels up you can easily tilt them towards the sun with the built-in brackets so you can maximize their efficiency. Of course, this isn’t a huge full-timer’s solar power setup, as described here, but we would have absolutely loved having it when we traveled around on weekends and vacations with our popup tent trailer!

There were other fabulous booths, and we picked up memory foam pillows and fancy LED lights and other things we really didn’t need but just couldn’t resist when we saw them in action. There was one booth selling yellow brooms that everyone was buying. No matter where you turned, someone had a yellow broomstick in their hands. When we finally got down to their booth, however, the demos were over because they had sold out. Whatever those brooms can do, it must be really great! Oh well… next time!

Outside there were lots of new RVs lined up. We are partial to fifth wheel trailers, so we wandered in and out of a lot of them. One of the most interesting fivers was the Alfa Gold from Lifestyle RV. The innovative floorplan has a storage room on the driver’s side with a back door leading out to it and a big ramp door that opens to the ground. The model on display had a motorcycle ramp in this room. 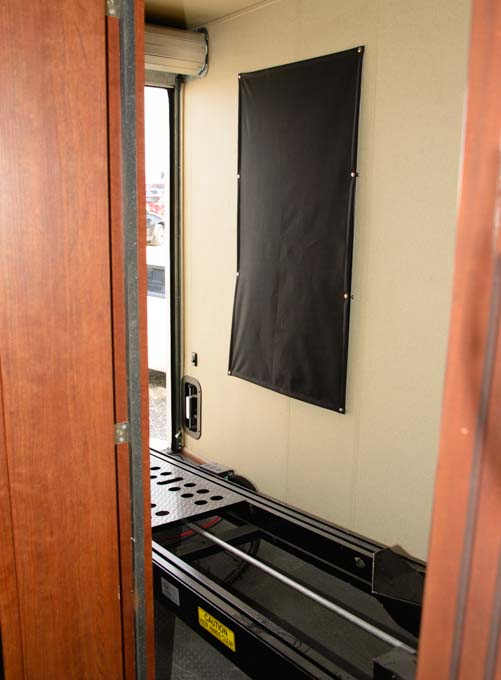 How about a little garage or storage room off the side of your fifth wheel?!

Another model just has a storage room. You could keep bikes, a generator, the grill, camping chairs, patio mats, tables and all kinds of other big gear in this room. How clever!

What a cool idea!

So, those are some of the wild and crazy things we saw at the unusual Quartzsite Arizona RV Show. This RV and Home Show is a kind of three ring circus in the desert, and I don’t know what we liked most — the RV stuff or the quirky sideshows!

Other blog posts from our RV travels to Quartzsite:

3 thoughts on “The RV Show in Quartzsite AZ – More Than Just RVs!”