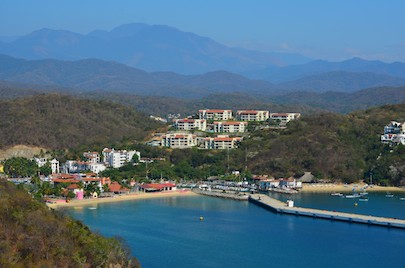 Early December, 2012 – After our beautiful day in the tropical orchard of Hagia Sofia, we left Marina Chahué to anchor out once again.  There are a dozen or so anchorages to choose from in the Bays of Huatulco, and we decided to spend a while in Santa Cruz Bay where we found three beautiful beaches, a snug little harbor-side village, and easy access to the town of La Crucecita. 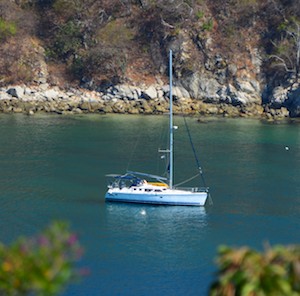 The roads along the bay are hilly, and we got a great feeling for the lay of the land on our many walks along the road that hugs the bay.

Various viewpoints give an awesome look down into the bay and across the little harbor and village. Groovy settled into a quiet spot right off a small beach.  The anchorage can hold about three or four cruising boats, but we were the only ones there for a long time. 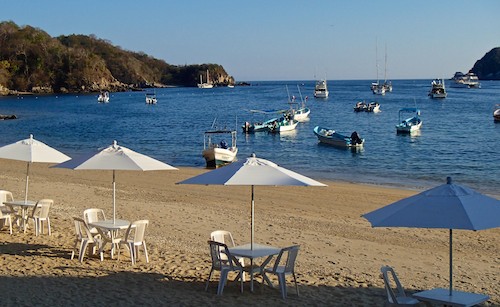 Looking out at the anchorage from the beach bars

The ospreys, pelicans and frigate birds circled in the air above us all day long, and the two beach bars on the little beach came alive at night.

After staring at those beach bars from the boat for a while, we just had to check out the view out into the bay from where they sat.  Not surprisingly, their view of us was just as appealing as our view of them!

We had our own nearly private beach

These were quiet days filled with simple pleasures.  Having easy access to activities on shore gave us the amusements of both surf and turf.  We could wander around on dry land whenever the mood struck us, but we could still take advantage of having a waterborne home.

The ocean was over 80 degrees, and the cabin temperatures were still frequently hitting 90 degrees in the late afternoons, so swimming became a natural part of every day.  Swimming off the boat is without doubt one of the greatest joys of living at anchor.  But being able to wade in from the beach and feel sand between our toes was just as nice.

The village of Santa Cruz surrounds a small harbor, and on the backside of town is Santa Cruz Beach, a slightly larger but wonderfully intimate little beach that soon became a frequent hangout for us. 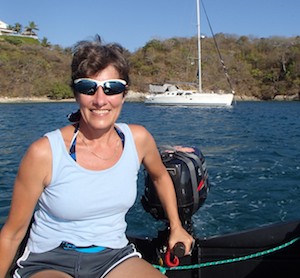 Our dinghy got us everywhere in minutes

It was a five minute dinghy ride to get over there, and as soon as our feet hit the sand we instantly turned into beach bums. 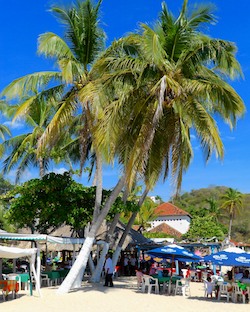 Palm trees and a beach – perfection!

There are sweeping palm trees that reach for the sky alongside a small row of very inviting beachside restaurants and bars.  All you have to do is grab a table and stake a claim to your own piece of paradise.  Stay until you’ve had your fill.

We kept pinching ourselves day after day, absolutely thrilled with life and amazed we could be living this way.  This was our third season of cruising Mexico, but it had never been anywhere near this good.

Like so many other hopeful cruisers, we had cast off the dock lines long ago to head to distant shores and “live the dream” of cruising. 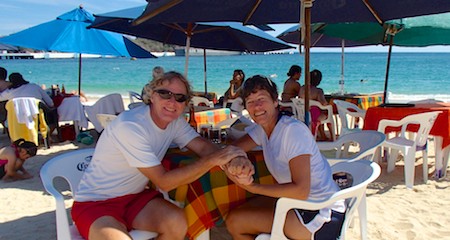 But the challenges of that dream had too often made it far from dreamy.  Rolly anchorages and sleepless nights, red tide and cold water, exhausting 200 miles passages and frightening overnights at sea had all joined forces each season to make us question our sanity in wanting to live on a sailboat. 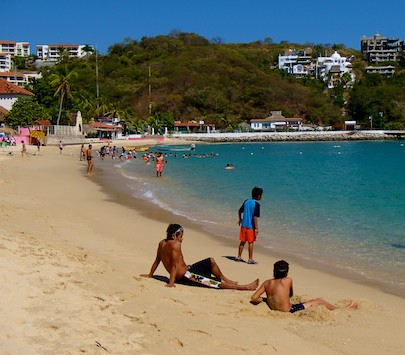 However, this year, during these weeks, in this place, it all came together and we were in heaven. The bay stayed calm, the water was intoxicatingly clear and warm, and the gods smiled down on us day after day.

On Santa Cruz Beach happy vacationers and locals alike would just wade out into the water a bit, have a seat, and stay seated with the water up to their necks, until they were totally water logged.  Families, couples, groups of teenage friends and toddlers all immersed themselves in the lapping waves, swishing their hands around, chatting and laughing for hours.  We did too! 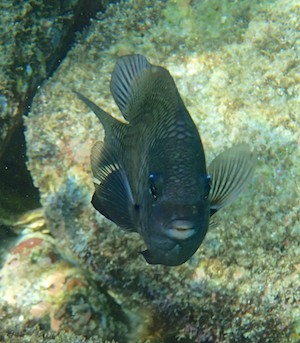 A fish checks out our new camera

Under water the fish milled around the rocks, nibbling here and there, and watching the snorkelers with curiosity.  We’d never played around with an underwater camera before, and we soon learned that getting Jacques Cousteau shots is not so easy.  Nothing stays still!  Just as we’d get the shot lined up, the fish would wriggle away or a wave would pick us up and move us — and the camera — a few feet.  But it was so much fun trying.

This is a wonderfully intimate little beach

On the beach the best entertainment was the little kids.  The small waves were just the right size for toddlers — big enough to lure them into the water but small enough not to be scary.  In and out they’d go, running, running, running. 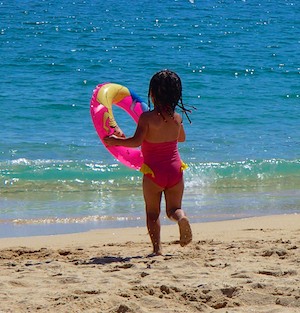 The waves were just right for toddlers 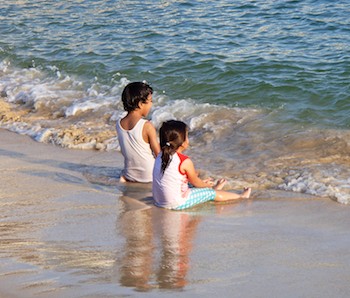 It’s so fun to watch the waves break in your lap!

Everyone wanted to get pics of each other to send home.  This is the kind of fun you just have to share, and we all knew we could make everyone back home incredibly jealous. 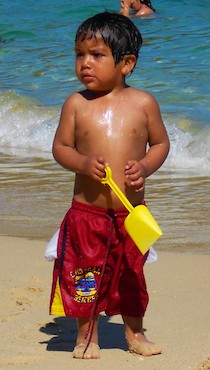 Friends posed for each other, getting the sand and water and blue sky lined up just right. Pairs of young girls did endless sexy poses for each other, each one showing off her assets while her friend clicked away.  After they’d do a few bikini model shots showing off the bathing suit from both the front and back, they’d suddenly lie down in the water to go for a curvaceous, alluring water shot. I suspect there are some lucky boyfriends out there! 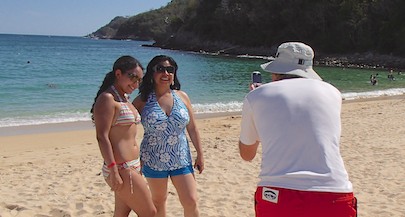 We all took pics of each other

Mark was only too happy to help out with these mini photo shoots, but the show always instantly became very G-rated!  The nice return was that we got some shots of ourselves to make our friends envious too. 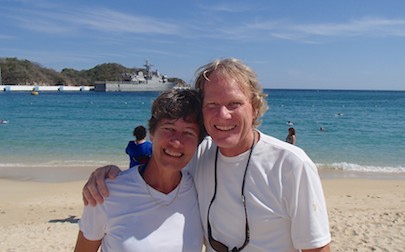 Up among the beach umbrellas where the margaritas and beers flowed with enthusiasm at every table, vendors wandered through selling their wares.  The usual stream of women passed through selling commercially made bead jewelry. 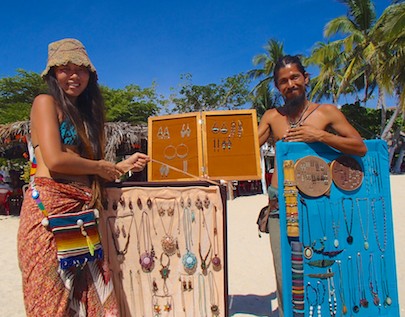 Far more intriguing was the young Japanese couple who stopped by.  Hailing from Kyoto, Japan, they were traveling across Mexico in a VW Microbus, funding their adventure with their own hand-made jewelry.

Another women sold bread that had the exact taste and texture of corn muffins — quite yummy.  And several women braided and beaded girls’ hair like Bo Derek.  One woman was very eager to do Mark’s hair. It is getting a little long, but I don’t think a head full of braids would be that becoming on him. 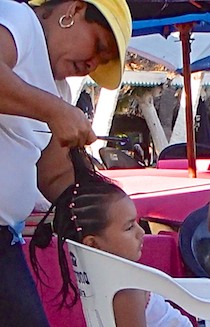 A little girl gets her hair braided

Some guitarists meandered by strumming melodies and then an old man showed up pushing an ice cream cart through the sand. 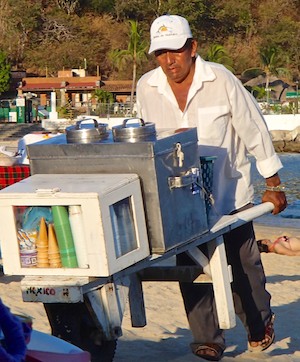 An ice cream vendor rolls his cart through the sand

This beach was a great place to kick back and watch the world go by.

The little harbor village of Santa Cruz is filled with pangas, open outboard-driven skiffs.  Some offer tours of the bays to tourists and many others are fishing boats.  As we wandered back to get our dinghy one afternoon a pair of young fellows on a scooter showed off the fish they had just caught.

Catch of the day!

A few minutes later, on our way out to the boat, we spotted two fishermen in a panga at the dock carving up some fish they had just caught. 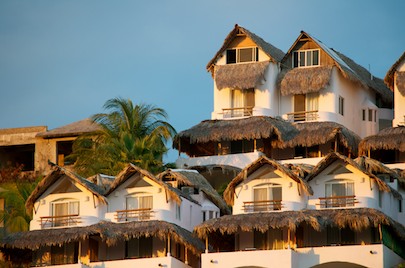 Late afternoon view from our cockpit

A quick conversation and negotiation, and we were suddenly waving goodbye and motoring away with a fillet for dinner. 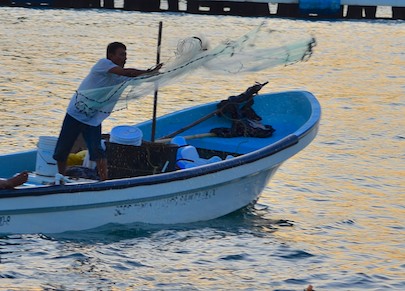 Back at Groovy a bunch of fishermen had surrounded our boat and were casting nets into the water.  I don’t know what kind of fish had arrived, but the fishermen knew they were there.  We had always had peaceful sunsets to ourselves, but for three nights in a row we got caught up in a flurry of fishing activity.  The fish were so thick around our boat we could see them from the cockpit.  Then one day the fish were gone and the fishermen were gone too. 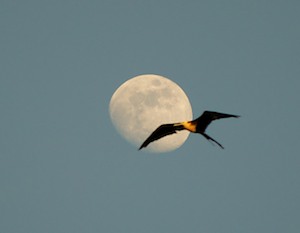 These were beautiful days of seaside living that blended into each other in a blur of wonder.

Tuesday rolled into Saturday and then it was suddenly Wednesday, or was it Friday? Who knew, and who really cared?  Mid-December caught us by surprise.  Time disappeared in a delicious, unhurried way.

Wouldn’t it be beautiful if life were always like this?  It is a dream so many of us share… For a precious time, our lives were suspended in tropical perfection.

And then, to top it off completely, we were gifted with 24 hours in heaven at the exquisite Las Palmas Resort!