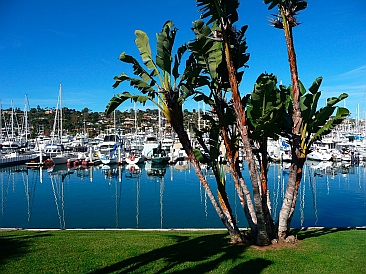 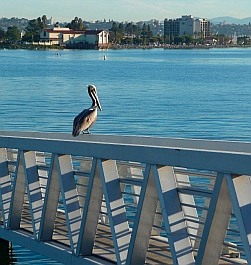 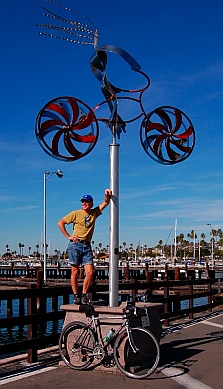 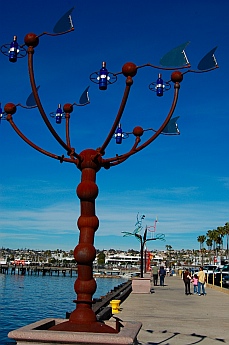 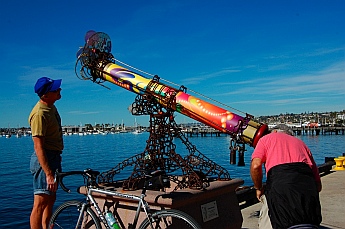 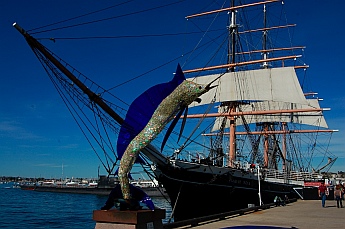 Marlin leaps across the Star of India's bow. 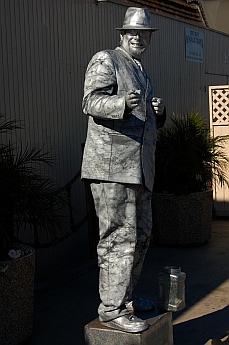 to life as we pass.

Bikes are an important part of San 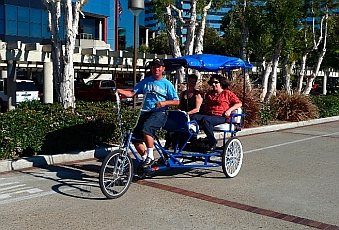 Pedalcabs cruise the boardwalks along the water. 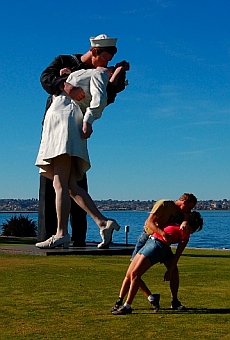 Mark and I mimic the famous WWII

Tourists learn their fortunes from a psychic. 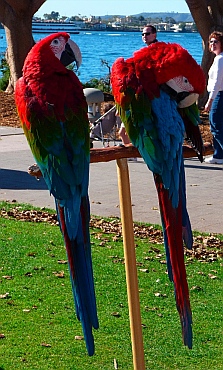 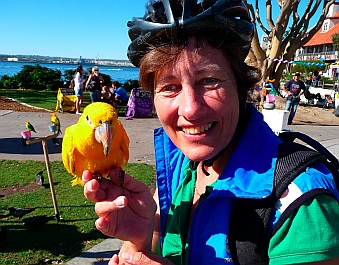 Ahh... I get one of several bird fixes during my San 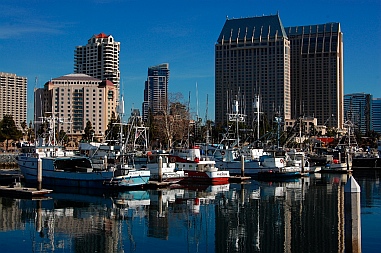 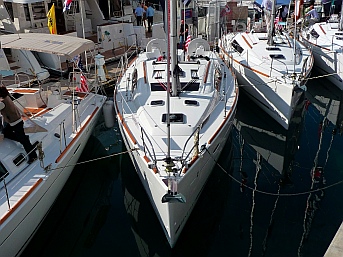 Beneteaus line the entrance to the boat show. 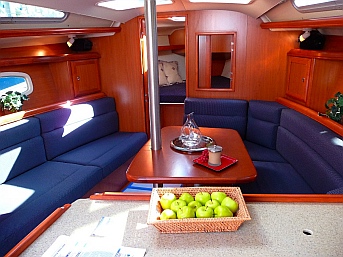 Yeah, I could live here! 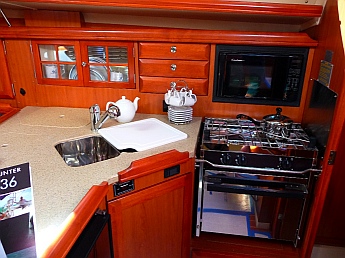 Familiar but a little different than our fifth wheel. 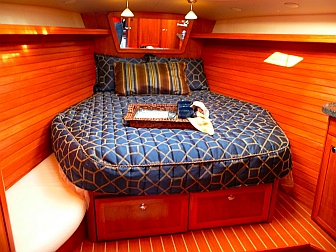 Not bad for living aboard. 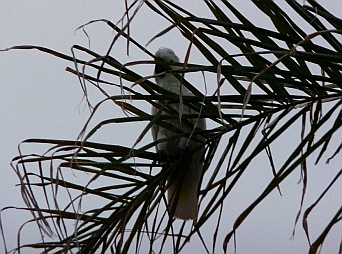 An Umbrella Cockatoo peers down at me from a 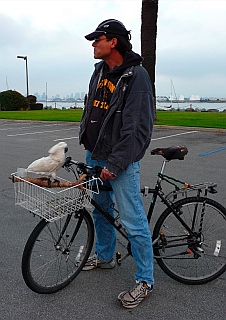 Dave takes his cockatoo out for a

fly in the late afternoon. 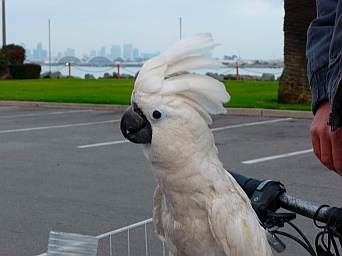 She loves every minute of her freedom. 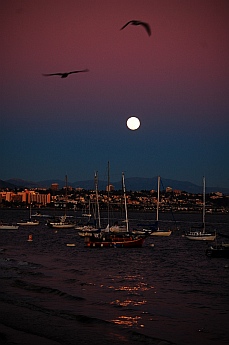 January, 2009 - We snuck away from the Arizona Desert and all the

for the annual January sailboat show.  We had had such a good time

there in October (Shelter Island and Mission Bay) that we wondered

if it would still be as nice.  Sure enough, as we pulled onto Shelter

Island, all the warm vibes we had felt in this spirited town came back.

It was bright and sunny, warm enough for shorts, and we were

surprised to recognize all the RVs lined up on the waterfront.  No one

We took our place among

them and quickly hopped

on our bikes to check out

all our old favorite haunts.

Not too much had changed

-- Kona Kai Marina was as

graceful as before, the pelicans still roosted and floated, soared and dove as they had

before, and the Navy jets and cruise ships and people walking their dogs and sailboats

The boat show was way down at the other end of San Diego, and for the first time we

rode our bikes over to Seaport Village.  It is a six mile ride along the bike paths and

walking trails, and it brings you all the way around the harbor through the historic Old

Town.  This is an outdoor city that comes alive in the sunshine.  There is a series of

charming sculptures along this boardwalk.  I liked the bird sculpture and Mark liked the

There was a lot of whimsy in

these sculptures, and one was

featured blue glass bottles on the

noses of the dolphins.  Another

was a giant kaleidoscope that

had lots of hand cranks and

beautiful colors when you peered

There is an extensive historical

that are tied up at the docks for

tourists to walk through.  A

glistening, iridescent statue of a

marlin appeared to leap out of the

waves across the bow of the Star

of India ship behind.

Street performers and vendors of

all kinds line the boardwalks and

grassy areas, giving the city a

a man in a suit suddenly came to

life and made a face at us as we

The boardwalks and paths are ideal for biking.

To see it all would make for a very long walk,

but taken slowly on a bike you can enjoy

everything that Old Town and Seaport Village

have to offer.  Along with the cycling statue we

saw earlier, there were other sculptural

references to bikes along the boardwalk.

Many tourists opt for a ride in a pedal-cab, and

we passed lots of these energetic cabbies toting

passengers all over the place.

Around one corner we came face

to face with a sculptural

representation of the famed WWII

photo of a sailor kissing a nurse

upon the victory of the Allies.  We

smooch, and found a friendly

fellow to take our picture.  He and

his large extended family of wife,

kids, parents and others all got a

huge laugh as we tried to get

ourselves situated just right and

asked him to re-take the photo

If you have something to sell or share with tourists, it

seems that the vending space is available.  A psychic

found a lovely spot for her umbrella-shaded table under

a tree, and another man brought out his collection of

parrots for people to play with, in hopes of a donation.  I

got my bird fix!

I lived on the Boston waterfront

in a sailboat for four years, but

beautiful as that city is, there is no comparison to San Diego for

warmth of spirit and oceanside magic.  San Diego harbor is

completely accessible to everyone.  Simply stroll along the water's

energy.  There are many marinas, and a boat owner can choose

to be situated right among the sky scraping posh hotels downtown,

or over in the more suburban and natural atmosphere of Shelter

We finally made it to the boat show, our hearts filled with

satisfaction already.  As usual, it was a blast.  All the boats were

beautiful, and it was easy to dream, along with all the other show-

goers, as we waltzed on and off these lovely yachts.  After living in

the confines of a trailer for a 20 months, it was amusing to stand in

each of the boats' cabins and compare the layouts.

Back on Shelter Island we heard the strangest sound coming from the trees.  I thought it must

be a young gull that was sick.  It was an insistent call, higher pitched than a gull, but with a

similar volume.  We walked around the parking lot craning our necks as we stared into the trees.

Then I spotted it -- an Umbrella Cockatoo!  She was

clinging to the branches of a palm tree, swinging up and

down, calling out in sheer glee.

hadn't heard earlier about "The Bird Man" who lived in a

motorhome along the street.  We were told he would

sometimes free fly his cockatoo in the late afternoons.

At last we would have a chance to meet him!  Dave

showed up on his bike, and after a few minutes his

cockatoo "Bubbi" flew down and landed on his shoulder.

She clucked in his ear and walked down his arm, beak-

by-toe as parrots do, until she was settled on his bike

I was entranced.  I owned two lesser sulphur crested

cockatoos at one time and would have loved to have

given them the freedom of outdoor flight, but I was too

afraid.  Dave had no such fear, and his cockatoo

showed off for us for an hour.  She swooped from tree

branches that gave her quite a ride as she hung on

with beak and claw, pumping the branches up and

down with powerful flaps of her wings while she

shrieked at the top of the her lungs.  A seagull flew by

her at one point and gave her a disapproving stare, but

she didn't care, she was free.  Shouldn't we all live that

Our three-day visit for the boat show turned into a 10-day stay.  Yet

again, we couldn't tear ourselves away from this enchanting place.

Finally our grey and black water tanks told us it was time to leave, and

Shelter Island.  I understand their point -- we met RVers who had lived on

those streets for as much as nine years, and that's not right -- but it is a

weeks.  It wouldn't have been that hard or that costly to implement a system to monitor and limit RV stays.