October, 2014 – The snow in Ouray, Colorado, had transformed the surrounding national forest into a winter wonderland. Each night we looked up to see a dome of sparkling diamonds in the sky. This was a perfect chance to do some astro-photography, and one night Mark got out all his camera gear and his jacket, hat, boots and mittens before going to bed.

Stars glitter in the heavens over Colorado 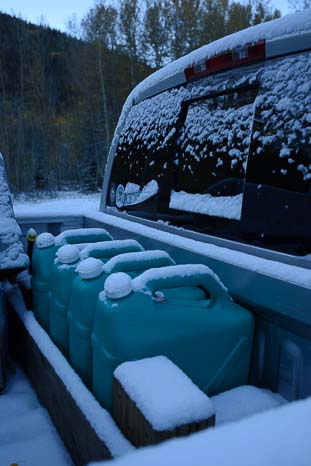 Even our water bottles were dusted with snow!

Sometime in the wee hours, while I was groping around for another blanket to pull over my head, he snuck outside and got some beautiful photos of the Milky Way and shimmering sky.

Another snowstorm delivered another dusting of the white stuff on everything, and we decided we had shivered enough.

As that night’s snow melted during the morning, we packed everything up, hitched up the buggy and started to pull out. 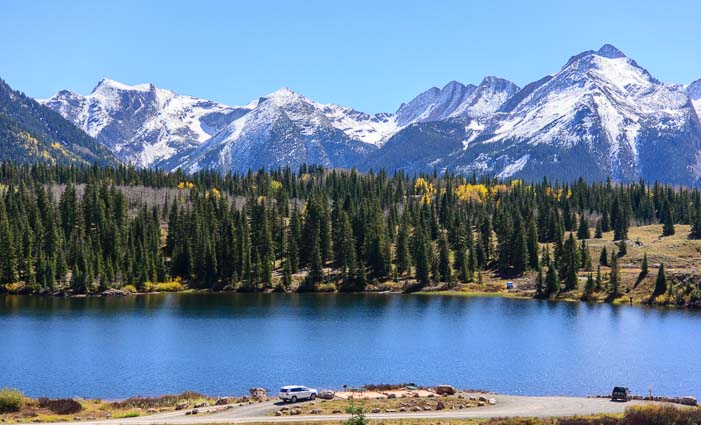 Our views on the Million Dollar Highway were spectacular.

Well, we TRIED to pull out!

The nice soft dirt that had been under the fifth wheel’s tires when we first set up camp had transformed into thick gooey mud.

Despite putting the truck in four wheel drive, the tires spun like crazy, flinging mud far and wide and splattering the whole front of the trailer. But the trailer didn’t budge! Mark grabbed our shovel and piled dry gravelly dirt in front of each of the truck and trailer tires. 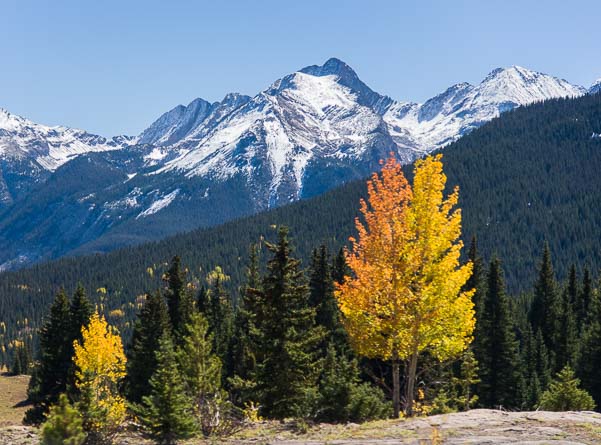 Nature was showing the last of her vibrant fall colors.

After a few groans from the hitch, the rig slowly began to move. We were on our way.

We drove up and over 11,000′ Red Mountain Pass into Silverton and then over two more passes before we dropped down into Durango.

The truck was working hard as it pulled our house along, but it made it through the three big climbs and descents just fine. Mark had recently installed a K&N air intake and an Edge Tuner, and these gave the truck a huge power boost on the many 10% grades.

The scenery was gorgeous, and it was bittersweet to leave the glowing aspens and snow-capped peaks behind.

But the red rocks of Arizona’s Indian country welcomed us.

We were on a mission to get to Phoenix, Arizona, so we didn’t dawdle anywhere. However, when the turn-off for Monument Valley slipped by, we did a U-turn and circled back to drive a short ways out on spectacular Route 163 towards the valley. 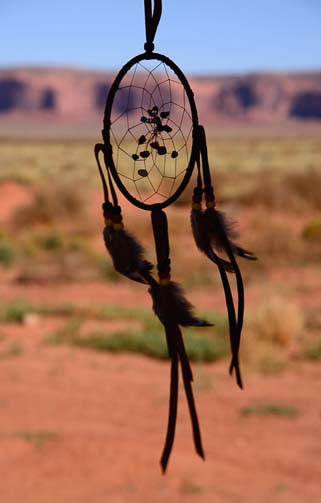 A dream catcher blows in the wind
at a souvenir stand.

We hadn’t done that drive in many years, but it was just as dramatic as we remembered it being.

This is an iconic place, and lots of Hollywood movies have been filmed among these famous rock formations (see a list here). 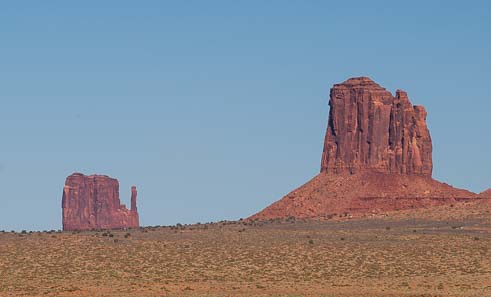 Monument Valley is famous for its mitten formations.

We had recently watched John Wayne’s black and white 1939 classic film Stagecoach and his 1956 film The Searchers which pretends this incredible landscape is in Texas! 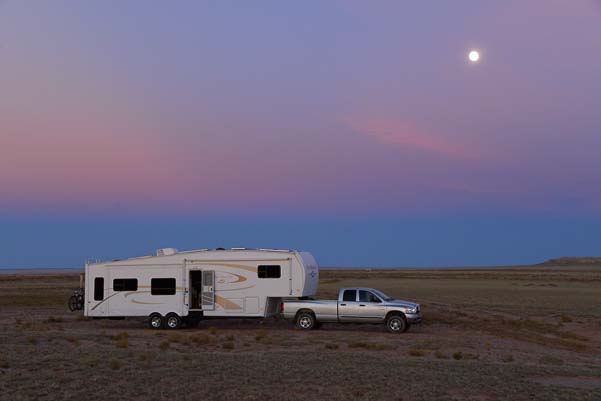 A full moon appeared at sunset.

Seeing these monoliths for real on the horizon was breathtaking.

The road into Monument Valley is dotted with simple little structures where Navajo Indians sell their jewelry, pottery and other crafts.

A dreamcatcher fluttering in the wind at one of these open air booths caught my eye as it twisted and turned against the backdrop of the distant red rocks.

I got chatting with the very friendly woman who was selling these trinkets.

Cows appear on a ridge. 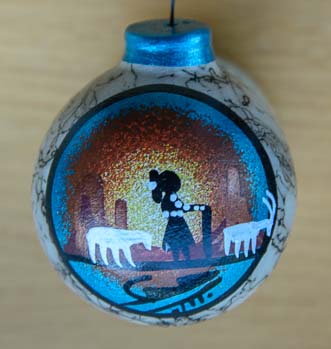 I remarked that she had quite a spectacular view out her “office” window and she smiled and joked that her twenty mile commute along these roads wasn’t too bad either.

I soon found myself picking out a beautifully painted ceramic Christmas ornament.

“Those are painted by my friend,” she said. “She makes each one by hand, and each one depicts a different aspect of traditional Navajo society.” 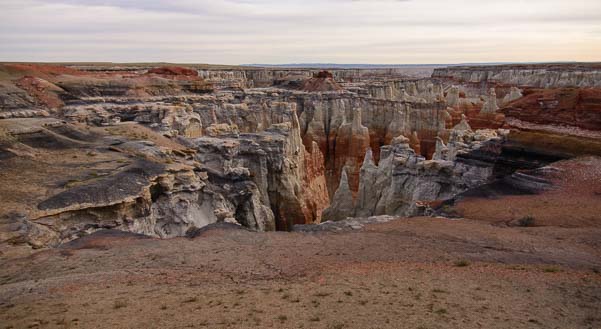 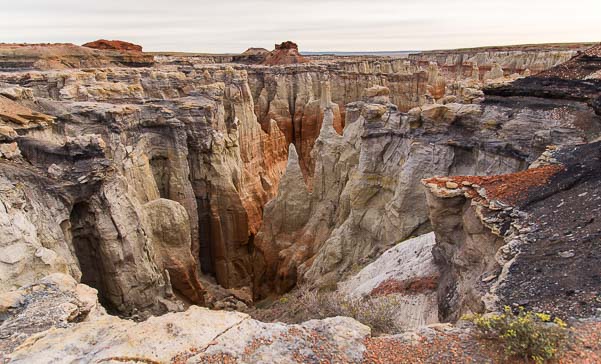 I looked at the ornament in my hand.

It occurred to me that even though we have driven through the Navajo Nation many times — it takes up a good 15% of Arizona in the northeast corner of the state — we didn’t know much about the people or culture that reside here.

Outside the craft shop two old Indian women stood talking together — in Navajo.

I tip-toed past very slowly, trying to catch the sound of their language that flowed so easily and freely between them.

Guttural, staccato and clipped, it sounded like no other language I’ve ever heard.

“We really need to spend more time here,” I said under my breath to Mark as we got back in the truck, wishing we could stay and get to know these people a bit and learn a little more.

Before I knew it, he’d taken a turn off the main road, and we were bumping down some side road.

He had us on a crazy detour that was taking us far from the busy Route 160 that zips through the center of this land between Cortez, Colorado, and Flagstaff, Arizona.

We drove along a variety of back roads, watching unusual rock formations rise and fall around us as the traffic grew lighter and lighter. 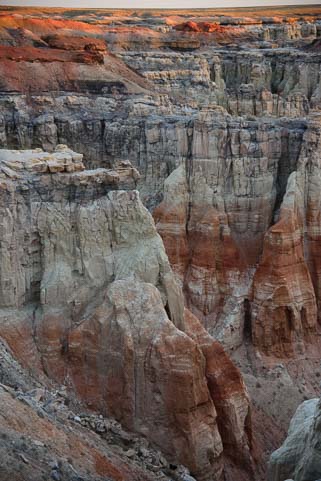 Suddenly, the land fell away in front of us. 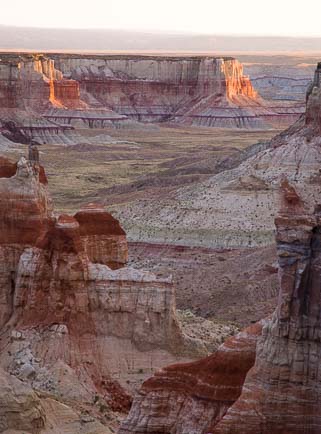 We were standing on the edge of a rainbow canyon that stretched vast and wide before us.

We ran out to take a closer look and found ourselves staring out at a massive bowl of towering hoodoos made of pink and red and white striped sandstone.

The spires were a thousand feet tall and the canyon stretched to the horizon.

What a beautiful and mysterious place. 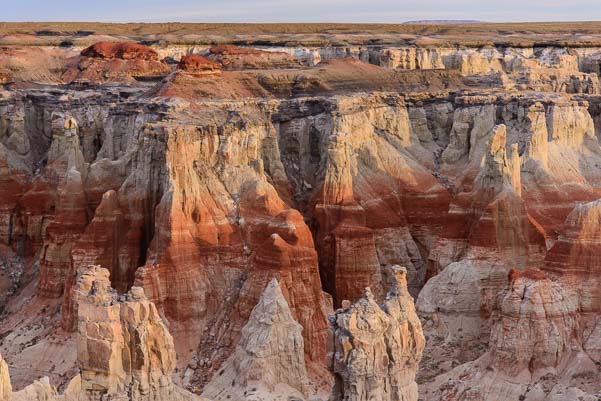 From what I’ve read, the Navajo are reserved and private people, and they aren’t quick to reveal the secrets of their lives. How fitting that an exotic natural treasure like this lies hidden in the vast wide open plains on their land, unmarked and unfettered by the trappings of civilization. We watched in awe as the sunrise slowly lit the canyon with a gentle glow. 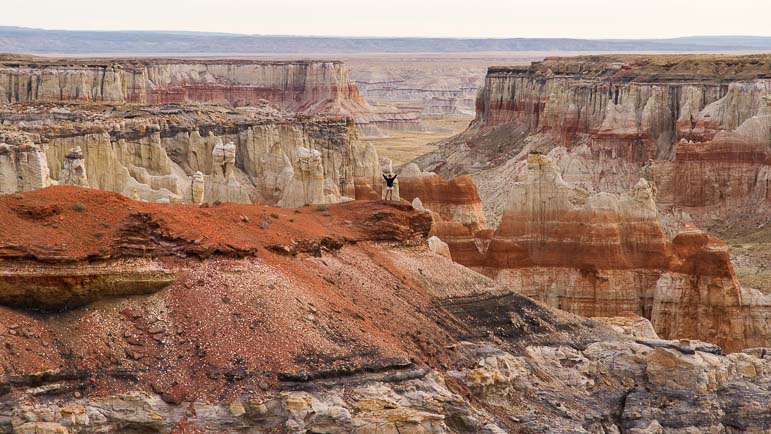 I wrote this post over Thanksgiving weekend, and an observant reader reminded me that Thanksgiving was, of course, a celebration shared by the Indians and the pilgrims centuries ago. The celebration took place in the fall of 1621 in Massachusetts, likely at the end of September, and was attended by 90 Wampanoag Indians and 53 pilgrims. The Navajo were a far distant tribe in Arizona, but they shared a similar spirit and heritage with the Indians of the Atlantic coast.

All our posts from Arizona: Here!

New to this site? Visit our Home page to read more about our full-time traveling lifestyle and our Intro for RVers to find out where we keep all the good stuff. If you like what you see, we'd love for you to subscribe to receive our latest posts!

6 thoughts on “Mysteries in the Navajo Nation, Arizona”