September 2015 – We knew as soon as we got to Maysville, Kentucky, that this was a unique town and that something special was going on here. But what makes one town stand out from all the rest?

For one thing, there are some great bakeries that make this town very sweet!

On our first morning in town, we discovered the Parc Café where we found delicious lattés and yummy croissants and muffins in a really pretty setting. During our stay we kept coming back for more, and we found that there were different kinds of goodies coming out of the oven every time we stopped in. 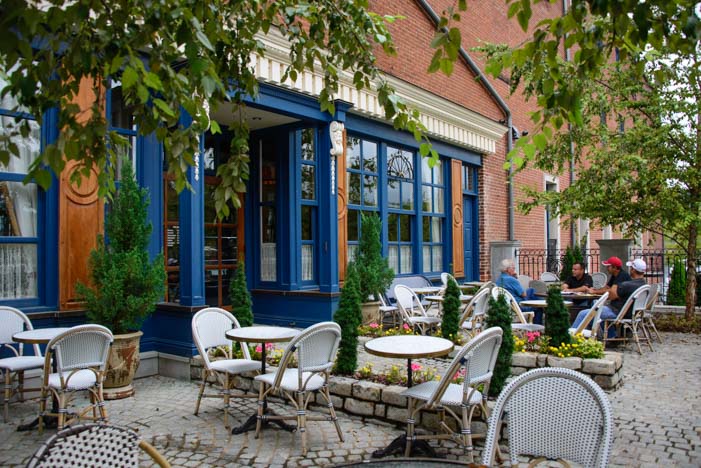 Even more unusual is The College Cafe. This little corner bakery is where the students from the Maysville Institute of Culinary Arts show off what they have learned in class. And all I can say is that whoever is teaching down there really knows their stuff.

We dove into sinfully delicious brownies and cookies, and stocked up our RV pantry for later too, and all for pennies on the dollar, because they sell their wares at prices that just cover their costs! 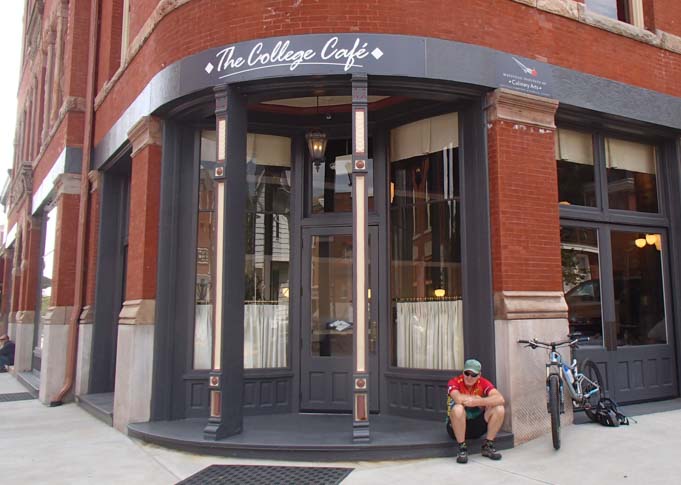 Students from the Maysville Institute of Culinary Arts strut their stuff here – yum!

But man doesn’t live by bread alone. There was something else here in Maysville that drew the town together, made the friendships so strong, and gave us a sense that neighbor helps neighbor and rich and poor rub shoulders without prejudice.

Pretty flowers in a city park

As we walked down to the river, we found that Maysville is actually a walled city. Unlike European walled cities, it isn’t walled against human invaders. Instead, it is walled against a much more powerful and brutal adversary: the Ohio River. 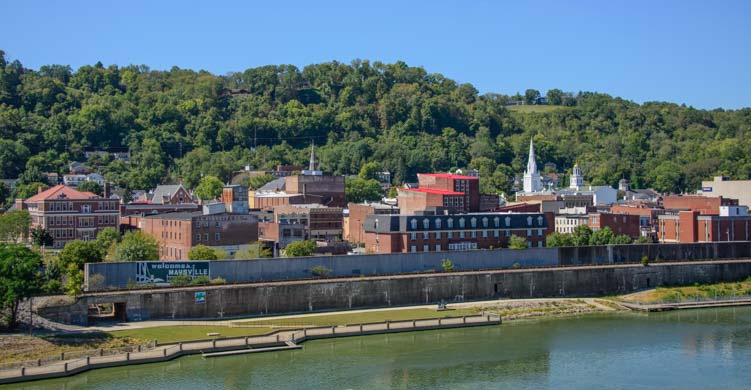 Maysville is protected from the menacing Ohio River by an enormous floodwall.

This towering concrete wall protects the town from the river’s floodwaters that have a nasty habit of rising to alarming heights with frightening regularity. The back side of the floodwall, facing into town, is decorated with beautiful and enormous murals that stand two dozen or so feet high. Each one depicts a period of Maysville’s history, starting with the Shawnee Indian buffalo hunters who stalked their prey in the area in the 1600’s. 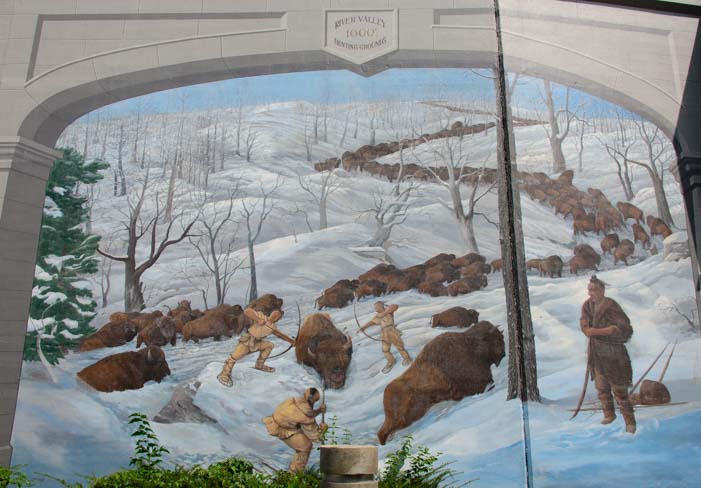 Another mural depicts a later period in the 1800’s when paddle boats cruised up and down the Ohio River, connecting Maysville to distant towns and giving birth to a thriving economy as goods and people traveled up and downstream.

The Ohio River gave Maysville a highway to the world

A few decades later, the town’s buildings had become much taller and the paddle boats had been replaced by huge barges. Maysville had become a very important port, and industry was booming.

But then the Ohio River flooded the town, first in 1884 and then again in 1937. Spring rains and snowmelt rushed downriver from the north, and the water in the city streets rose higher and higher until the buildings were immersed.

The 1937 flood was such a doozy that it wiped out many of the buildings on Front Street right along the river. Rather than giving up in despair, however, the townspeople responded by banding together and erecting an enormous floodwall to protect their town from the river in the future.

The floodwall gate at Limestone Landing

At Limestone Landing there is a huge floodwall gate. As we walked through, we wondered how the city closed the gate when floodwaters came. A city worker named Terry showed us the brick partitions that are stored right next to the gate. Would there really be time to get all those things in place? I asked him. Oh yes, he said, you usually get a few days’ notice! 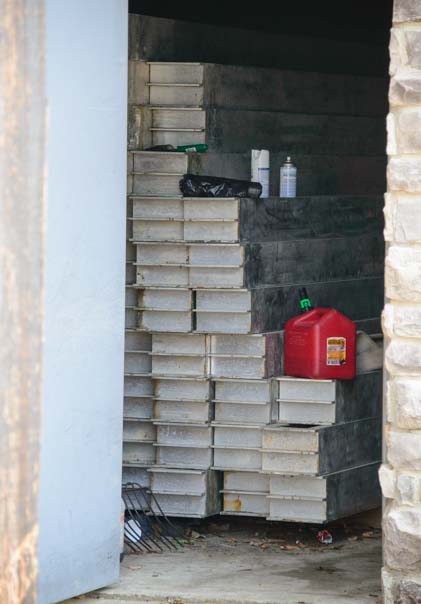 I looked out at the placid and seemingly harmless water. The Ohio River sure didn’t look like an enemy, and it certainly wasn’t an enemy that used ambush tactics. Instead, it is a much more sinister foe that gives you plenty of advance warning before it attacks, and then relentlessly advances, inch by frightening inch!

It was hard to imagine those floodwaters rising so. Terry described standing on the railroad tracks alongside the river and watching a house float by in the terrifying flood of 1997.

Yet the river is very beautiful and placid 99% of the time. Down at the river’s edge the town has built a wonderful zig-zag boardwalk where we watched barges pushing cargo up and down the river under the Simon Kenton Memorial Bridge. 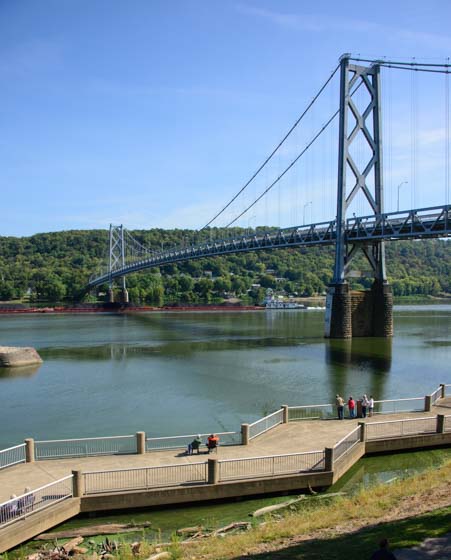 There is a wonderful boardwalk along the river at Limestone Landing

One day a school class came down to the river to watch an old World War II ship sail past, and we listened from a distance as they were given a little lesson about the geography of the states of Ohio and Kentucky and the river that runs between them. 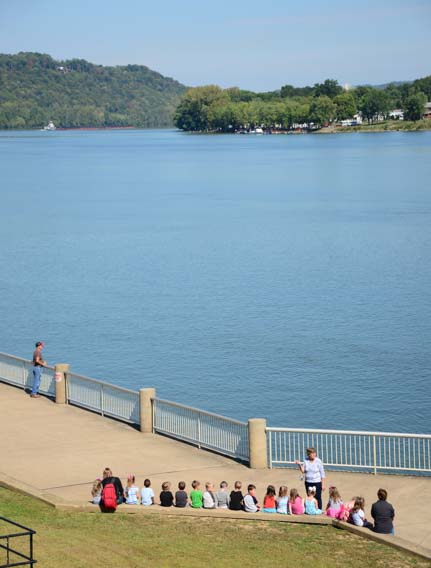 In the distance we could see a power plant that also relies on the river for its operations. 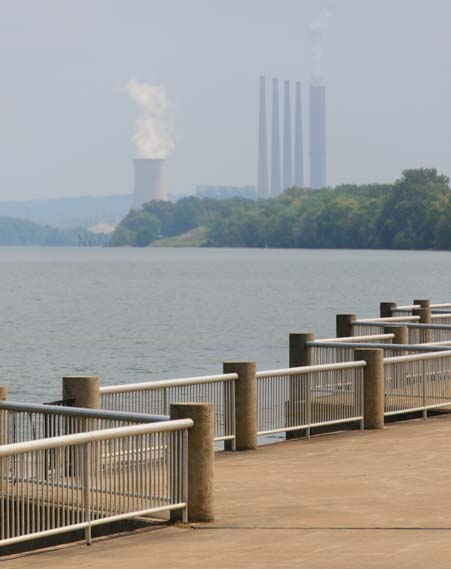 The Ohio River plays an important part in many aspects of day to day life here. And just as the barges carry goods up and down the river day in and day out, trains have done the same thing right next to the river for a century.

Trains parallel the barges next to the river.

Maysville is a waterfront town, and Limestone Landing is a great place to enjoy the beauty of the river. From the floodwall gate a tunnel goes underneath the train tracks to the river, and hundreds of clay tiles line the tunnel walls, each one imprinted with a child’s hand. This very cool riverside artwork was a school project in the mid 1990’s. 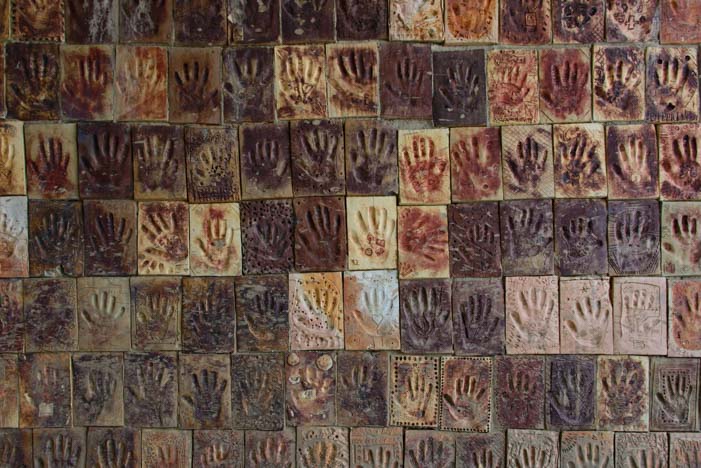 Touching artwork decorates the walls of the tunnel under the train tracks,
courtesy of the local high school kids in the mid 1990’s

We’d never spent much time in a river town before, and as the days passed we began to realize just how deeply the Ohio River is integrated into Maysville’s soul. It’s not just that the river gave rise to the town’s early settlement and burgeoning economy two centuries ago. It is simpler and yet also more subtle than that.

The Ohio River put Maysville on the map, but in return, it has reminded the town, in startling 50-60 year intervals ever since, that it also has the ability to take it off the map!

As this barge floats past Maysville, it’s hard to imagine how devastating an Ohio River flood can be.

But Maysville gets plenty of small reminders of what the river can do in between those mammoth floods. Last year’s heavy snows and rains brought the river almost to the base of the floodwall in the spring, covering the zig-zag boardwalk by many feet and rising through the clay tile decorated tunnel and going right up the staircase that leads to the floodwall gate. It did the same thing a few years earlier.

Without a doubt, living with a neighbor — and benefactor — just over the wall that is as temperamental as the Mighty Ohio River will shape a town’s personality.

Perhaps it has united the community in ways that other towns never experience. Keeping the river at bay must be a special source of pride, and certainly everyone we met expressed a genuine affection for Maysville that is far deeper than most people feel for their hometown.

And perhaps the bakeries in Maysville are so good because people in town understand the importance of living by this credo:

High up on 6th Street we got an awesome bird’s eye view of the town and the river as we looked across the rooftops at the two suspension bridges, the older Simon Kenton Memorial Bridge and the very modern William Harsha suspension bridge in the distance. 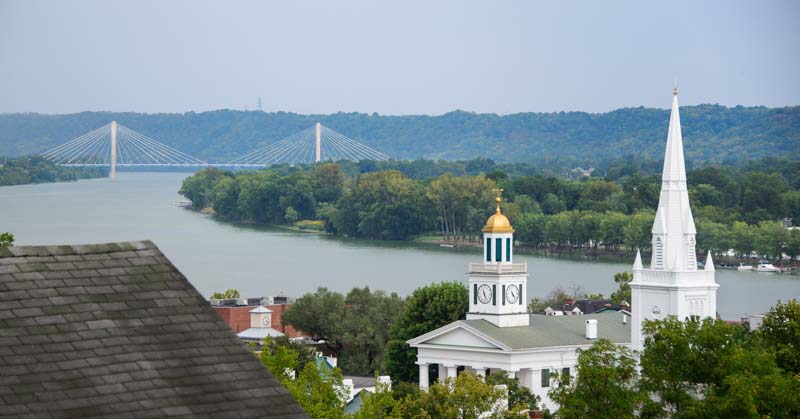 Maysville is flanked by two beautiful suspension bridges.
The William Harsha bridge in the distance has a wonderfully sleek and modern design.

In the days that followed, we learned that there was another equally important sculptor, besides the Ohio River, that played a role in forming Maysville’s unique spirit: the tobacco fields. And we were very fortunate to be given a special view of this labor intensive industry up close…

Other posts from our RV travels to Maysville, Kentucky:

12 thoughts on “A Sweet Life on the Ohio River – Maysville, Kentucky”