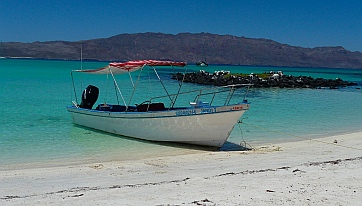 The turquoise water reflects off

A turkey vulture looks for carion on the beach.

A seagull perches on a 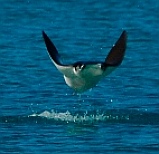 Buses wait in a dirt lot to take the resort 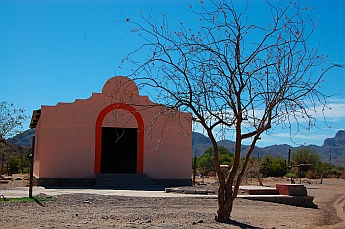 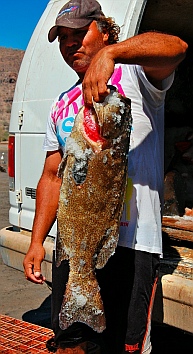 Jose holds up a cabrilla for us. 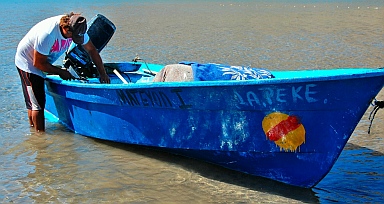 Jose fillets the cabrilla in his panga. 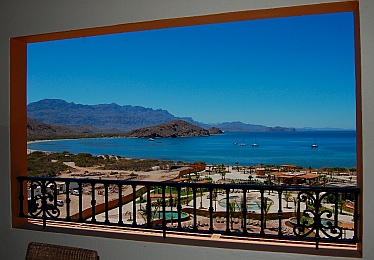 The resort pools are creatively laid out.

A golf course is going in behind the resort.

A spa and restaurant will grace one end of the resort. 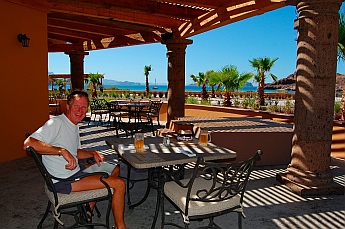 The pool bar overlooks the bay.

Dining in the desert by an open fire -- reminiscent of

the finest resorts in Scottsdale, Arizona.

relax.  All of a sudden the exertion of seven

months of cruising the Mexican coast had

caught up with us, and there in that little oasis

of tranquility we unwound until we became

blobs of jello.  We went to bed before sundown,

got up after sunrise, and stretched out for naps

in between.  For 17 days the Sea of Cortez

gave us a life without the distraction of the

internet.  The world beyond our immediate

surroundings on the sea seemed very far away.

rose out of the mountains, overshadowing a cove and filling our view.

"Holy mackerel, what is that?"  Civilization.  Land of plush vacations.

We could almost hear the air conditioners throbbing, the fresh water

pumping, the workers scurrying.  We could almost see the elegant

meals being served by uniformed waiters on linen tablecloths while

islands.  Our guidebooks called the bay "Bahía Candeleros," and

mentioned only that a resort was under construction there.  Well, it's

We weren't ready for all that quite yet.  We pressed on, weaving between

the islands and taking a detour around the eastern side of Isla Carmen.

Here the colorful towering cliffs and crying gulls took over once again.  We

stopped at Punta Colorada, and again at a place the guidebook called

"Painted Cliffs" and finally at Punta Perico.  Besides one other sailboat and

the hum of cruisers talking on the radio, humanity disappeared once again.

A few days later we arrived at Isla

cove where the water is such a bright

turquoise that it reflects off the gulls'

wings as they fly overhead.  We relaxed

into jello once again.  Between swims

Steinbeck's Log of the Sea of Cortez while Mark played guitar.

on a chartered California sardine boat.  Packed in with six other

guys, he took a six week voyage from California to Cabo, and then

along the inner coastline of the Sea of Cortez and back.  Endless

jars of pickled specimens that the crew collected from tidepools

filled every available space on the boat: crabs, worms, sea

cucumbers, and much more.

I laughed out loud at his wry tales.  They

were all the more poignant because

certain aspects of traveling the Mexican

coast by boat have not changed since

Steinbeck's time.  His skiff's cranky outboard engine, which he derisively nicknamed the "Sea-Cow,"

quickly became an eighth grumpy personality in the mix, running only when it wasn't needed and

leaving the men to row their dinghy in the most challenging conditions.  The crew bickered about

whose turn it was to wash dishes, harassing each other with practical jokes.  And they got caught by

evening."  By the end of the trip they were all thickly encrusted in salt, as they had long since given up

using fresh water to wash their bodies or their clothes.  In fact, from the start they found the quality of

consume as little water as possible and live on beer instead.

As I read Steinbeck's Log I found myself pondering the many changes, both

subtle and dramatic, that have taken place in the last 71 years in this remote

town today was, in Steinbeck's time, "a sad little town" whose road in from the

bay was "two wheel-ruts in the dust."  At La Paz he bemoaned a new

"expensive looking" hotel going up, as it spelled the end of the town's unique

character and isolation.  "Probably the airplanes will bring weekenders from

Los Angeles before long, and the beautiful bedraggled old town will bloom

with a Floridian ugliness."

swordfish.  Swarming the boat in thick schools, they "jumped clear out of the

water" and "seemed to play in pure joy."  In other places the schools were

tuna, and they too leaped around the boat with total abandon.  The tuna

would shimmer silver in the sun as they rocketed out of the blue depths and wriggled in the air.  On the Pacific side of Baja

between Magdalena Bay and Cabo San Lucas, he wrote: "We came upon hosts of...red rock-lobsters on the surface,

brilliant red and beautiful against the ultramarine of the water...The water seemed almost solid with the little red crustacea."

We haven't seen any of those things, and we haven't heard of anyone else seeing them either.  However, the leaping manta

rays Steinbeck describes are still here, doing somersaults and slapping the water in loud belly smacks.  We had first seen

them 500 miles south in Las Hadas in Manzanillo.  They cruised Isla Coronado's cove in huge schools, fooling us when we

first arrived into thinking we had accidentally anchored next to a rock.  Jumping in with masks and snorkels, we searched

everywhere for that rock only to realize it had been a school of rays floating past.

the Japanese shrimping factory ships that filled the Sea in 1940.

the bottom clean of all sea life.  Fish from every level of the sea came up in the nets: sharks, turtles,

pompano, sea horses, sea fans and more.  All were discarded overboard in a sea of death, except the

shrimp which were processed and packaged to be taken home to Japan.  He bitterly lamented the

waste of a massive food source that could feed the Mexican people indefinitely.  At the same time he

conceded that none of the dead fish were wasted, as the birds scooped up every morsel that had been

thrown over the side.

of Baja as he sailed south from San Diego last January.  He learned that these men work in

cooperatives for Japanese ships that wait in Ensenada and sail once the holds are filled.  The

lobstermen have a quotas that the cooperative must meet -- some 20,000 tons of lobster

While Steinbeck and his crew got progressively grubbier, drinking warm beer and eating

spaghetti twice a week, they felt a stab of jealousy when a sleek black yacht sailed by.  The

passengers, dressed in white, relaxed in chairs on the shaded back deck sipping tall cool

drinks.  Today we see the enormous power megayachts and can only wonder what that life

is like.  The upper crust passengers are usually hidden behind large tinted windows, and

the sliding glass doors are usually closed to keep the air conditioning in.

doubled back.  "Bahia Candeleros" seems to be the name that was assigned to this bay by

the earliest cruisers and nautical charts.  But we soon learned that everyone in the nearby

village -- and even Google Earth -- refers to this bay as "Ensenada Blanca."

Whatever the name, it is a fascinating convergence of the old Sea and the new.  At one end

storm.  A tiny village half a mile inland has a small church and store, reminiscent of Agua

Verde a few miles south.  Pangas on the beach bring in small boatloads of fish.

"cabrilla" (bass) that had been caught and laid on ice that morning.  He

seawater at his feet.  The gulls and pelicans gathered in a noisy crowd

nearby and fought each other over scraps.

Jose explained to us

that the well built

have seen on every

part of the Mexican

coast are built in

made in the US.  These

rugged boats have replaced the common

light wood, braced inside with struts...seaworthy and fast."  Today's pangas are driven by

powerful outboards whereas the canoes were "paddled by two men, one at either end."

The eldest Baja citizens, whom Steinbeck called "Indians," would have been small children

when he was here.  He wrote: "When we think of La Paz it is always of the small boys that we

think first."  They swarmed his boat, curious and eager to help him collect sea creatures when

he offered a few centavos per specimen.  Those boys would be old men now, and they may

gringos in exchange for a few centavos each.  Not even a full lifetime has passed.

Wandering down to the other

centuries must have gone by.

The gargantuan resort is called

Villa del Palmar, and the guards

were happy to arrange a tour for

finest materials have been used,

each suite, and the layout of the pools and gardens, as viewed

from a seventh floor balcony, is an artful pattern in the shape of

a sea turtle.  It is Scottsdale, Arizona on the Sea.

will follow.  A golf course will line the base of the mountains and

condos will be built in all of the nooks and crannies in between.

We looked out over the construction in awe.  Backhoes clawed

the dirt while cement trucks flowed to and fro.  Uniformed men

with clipboards checked the progress while workers nodded

confidently at them, wiping their sweaty brows with dusty

hands.  The air was filled with purpose and excitement.

Our tour guide, Gabriel, lives in Loreto and he couldn't stop

smiling throughout the entire tour.  He is thrilled to have this

job, working in a beautiful place in handsome clothes and with

what he believes is a fine future ahead.  He told us the resort

employs 250 people.  About 50 guests were there during its

second month of operation.  We had seen the buses that the

company uses to bring the employees in from town.  The road

In the afternoon Mauricio, the music electronics whiz who sets up

the karaoke machines at the pool bar, told us he transferred in

from Mexico city.  He is being housed in one of the beautiful

can transfer his family from the mainland.  He likes the school

system in Loreto and is pleased there is a university there.  His

wife, a bank manager, may find work at the hotel too, and he hopes

The entire resort pulsed with the feelings of opportunity, promise

and the future.  This is the new Sea of Cortez that Steinbeck

knew was coming, tamed and gentrified for well-heeled tourists.

Along with the classy resort came an internet signal, and what a

Osama bin Laden had been captured and killed.  This mirrored

Steinbeck's experience too.  He discovered that while he was in

the Sea, "Hitler marched into Denmark and into Norway, France

had fallen, the Maginot line was lost -- we didn't know it but we

knew the daily catch of every boat within 400 miles."

We stayed for several days, enjoying

need for provisions pushed us into the

busy ports of Puerto Escondido and