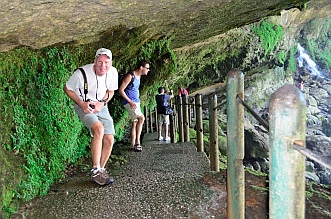 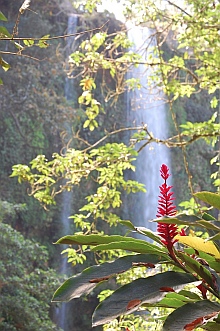 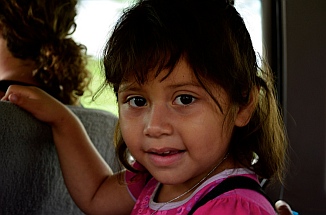 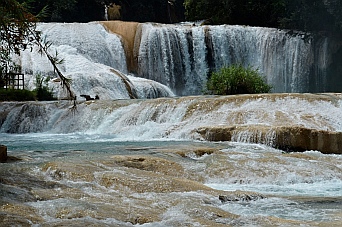 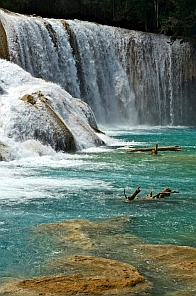 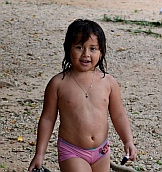 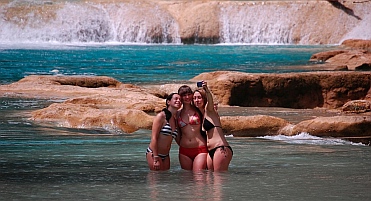 Everyone gets photos of themselves at the falls. 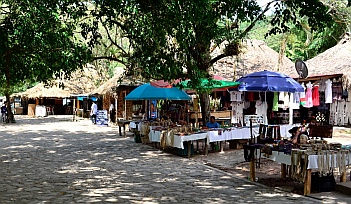 Vendors in palapas line the falls. 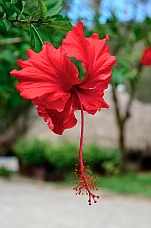 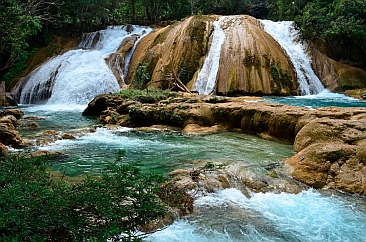 The falls tumble down many layers of boulders. 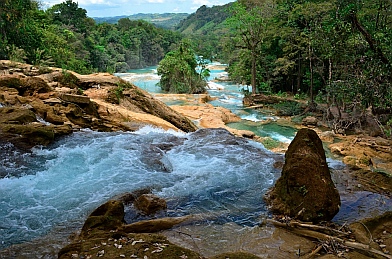 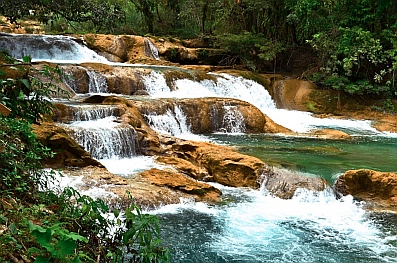 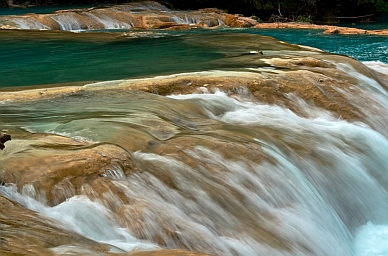 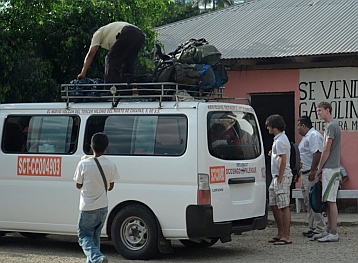 Our companions get into another van. 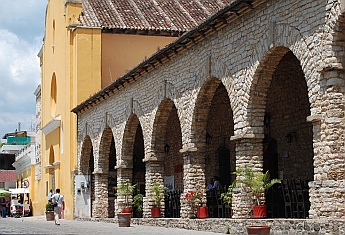 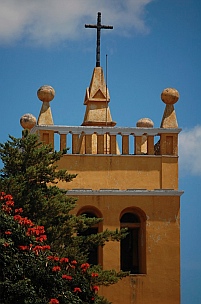 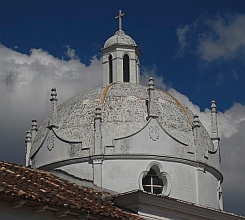 Lots of church steeples in this town. 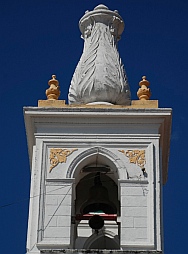 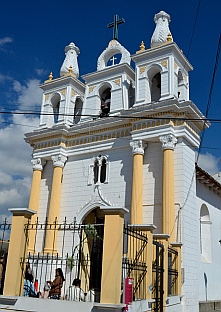 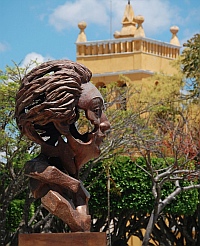 Modern sculpture in the Zócalo 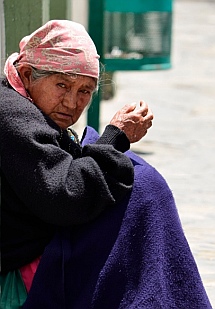 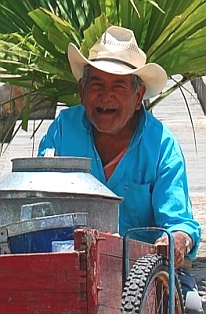 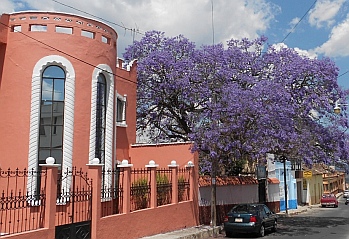 Spring is in the air. 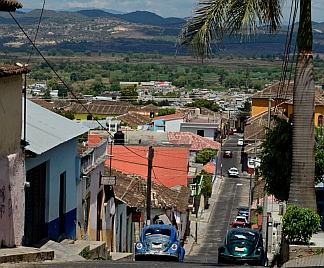 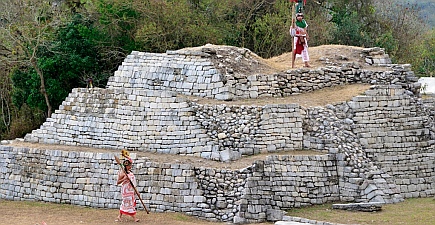 Performers appear on the 1200-year-old ruins. 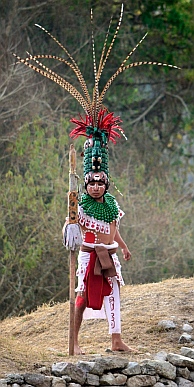 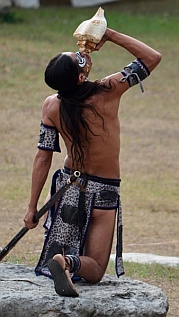 Blowing on a conch shell. 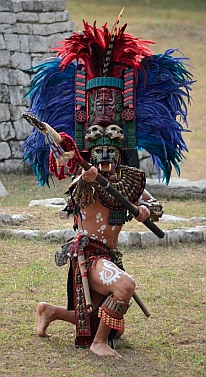 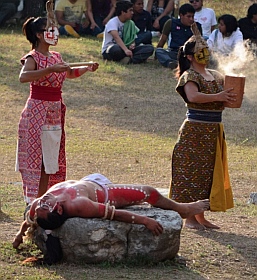 Rituals for the dead victim.

March, 2012 - Besides the mysterious ruins of Yaxchilan & Bonampak, the Palenque

area is bursting with beautiful natural features as well.  We hopped on another van

tour, this time to see waterfalls.  We went with a no-name tour company, one of dozens

selling tours in town.  It was cheap, this was just a day trip, and all we really needed

was transportation to the falls.  We sat behind a very seasoned Central American

Mexico to Colombia.  His itinerary, unlike ours for some reason, included both the

waterfalls and the Palenque ruins.

"I never have any expectations

when I get on a bus in these

parts."  He said knowingly.  We

had had plenty of bus

adventures, so we nodded with

him, almost as knowingly.

Our first stop of the day, after

bouncing over the rough roads

out of town, was the magnificent

of water flowed in a steady

stream off a cliff into a cool, wide

pool.  We followed a short trail

down to the falls and discovered

we could crawl underneath a rock

outcropping behind them.  The fine

mist that sprayed us all was

Our group was in high spirits in the

early morning air as we piled back

into the van.  Young European

including a pair of gorgeous, tall,

and three boys from Switzerland, Austria and Germany speaking German together in the

next to me and asked to see our waterfall photos on our cameras.

to our granddaughters and she told us about her cousin.  There's nothing like having a

four-year-old native speaker show you just how poor your command of Spanish really is.

Her giggles and funny faces made it clear we sounded pretty goofy to her.  Luckily her

grandma bailed us (and her) out a

few times when our conversation

reached a total impasse of

incomprehension.  We were quite

humbled when she later talked up a

storm with the van driver!

Our next stop was Agua Azul, a

series of cascading waterfalls that

and lands in the most exquisite

their time soaking in the views and

posing for photos.  The water

thunders down the rocks from

several directions and then rests for

a bit in shades of aquamarine before

The tour vans line up outside the park

while visitors are granted anywhere from

an hour to an afternoon to enjoy the falls

and pools.  Lots of young travelers

eagerly donned their swimsuits and

jumped into the water.

Vendors selling all kinds of snacks and

trinkets under makeshift palapas line the

sides of the waterfalls at various levels beside the endless wooden stairs going up.  We climbed up

and up and up looking for the top of the falls.  The clan of young boys from our van rushed ahead

and later reported that there was a fantastic swimming hole

a mile or so away.  We never got that far.  Instead we

great way to eat mangos!) and watermelon slices in a cup.

After a few wonderful afternoon hours at these rushing

falls and placid pools, we all made our way back to the

van, a little damp, and rather tired at the end of a great

day.  The drive back should have taken just an hour, but

this was a budget van.  It turned out that not only had our

North Carolina friend, Tom, not been taken to the ruins in

Palenque as he expected, but the European travelers with

us were not returning to the town of Palenque at all.  They

were headed in the opposite direction to San Cristóbal de

Apparently our van was supposed to meet another van on the

road somewhere and transfer the travelers over.  Problem

was, "where" and "when" were not well defined, and although

waiting for over an hour, the other van never showed up.  Tom

just nodded knowingly with a smirk on his face.

Luckily we all had lots to talk about, comparing notes about

what we'd seen in Mexico, and talking about what we missed

most from home.  The young German fellow said he missed

his wiener schnitzel terribly, and we all missed our favorite dark

beers from home.  Travel is wonderful, but homesickness for

familiar things steals over you once in a while.

their promised destination.  That van was already full, so I can only

imagine what everyone thought when five extra people and their

We could have easily stayed in Palenque another week, but

more urgent tone, and we decided it was best to begin our trek out

of the jungle just in case we needed to fly back soon.  In the bus

Palenque ruins.  Oh my!  We were leaving the Mayan world on the

The distance from Palenque to Puerto

Chiapas where Groovy was waiting for

days of bus travel.  We decided to

break it up by stopping in Comitán, a

colonial city we had glimpsed from the

bus window on our way to San

Cristóbal and that had perked our

After spending several weeks plunk in

the middle of the touristy Gringo Trail,

surrounded by fellow travelers from

foreign countries, it was a delightful

change to walk the streets of Comitán.

It has all the colonial charm of other similar towns, but has

not been singled out for tourism development in the same

way.  Everyone on the streets was a local, or at least

Mexican, and all the happenings around town were put on

It is a hilly town, with a multitude of church spires piercing the sky.  The

Santo Domingo cathedral is the oldest, dating to the late 16th century,

some 50 years or so after Comitán was conquered by the Spanish.

Santo Domingo sits on the edge of the Zócalo, or town square, and while

late afternoon, we listened to the priest giving a sermon to his flock,

broadcast over speakers on the outside of the church.

The Zócalo is the heart of the town, and people hang out in the park doing all the fun

things that parks are made for: relaxing, people watching, selling stuff, buying stuff,

and, of course, enjoying each other's company in a romantic setting.

While wandering around I

looked up to see a huge

celebration of the Spring

Equinox at the local

We quickly jumped into a

headed out to the ruins a

few miles away.  This was

and the van was stuffed

people.  It was full body

against those of fellow

passengers on each side.

We all breathed each

those lucky enough to be

near an open window.

on their laps, oldest ones

on the bottom and

We learned that the

Puente was at its peak

AD, although it was

It wasn't discovered by

got there the ruins had

been closed off for the

celebration, so we saw

just the first building which stood opposite a hill of

staircases so common to Mayan sites.  Those stairs make

perfect stadium seating, and as they quickly filled with

hundreds of people I got a chill thinking of

how the ancient Mayans had probably sat

there just like we were now for their own

gatherings over a thousand years ago.

Suddenly a trumpet sounded and some

figures appeared on the building.  The men

scrambled over the ruin.  An announcer

had talked for a while about the

performance before it began, but I couldn't

quite catch all the details.  The performance

depicted a battle, a killing, and some rituals

related to the death of the victim.  I think I

had expected something mystical involving

the alignment of the setting sun and the

buildings and some fascinating connection

to the Mayan calendar.  But this dance and music celebration had its own special

magic, especially as I scanned the crowd and realized that more than a few among

them may have had ancestors that lived inside these ruined walls when they were first built.

We took the overnight bus

to Tapachula that night, and returned to our sailboat Groovy in

the morning.  The boat, the marina and the world of cruising

suddenly seemed very foreign in those early dawn hours.  The

Tehuantepec had quieted down for a few days and boats

were arriving from Huatulco at the marina hourly.  As we

caught the dock lines for the incoming boats our groggy minds

were still far away, filled with the vibrant images of the jungle.

Soon, however, we would be immersed in reality and thrust

back into modern American life on a long road that eventually